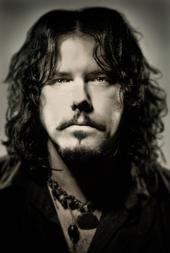 If you haven't caught The Armada live this year, then you're just not trying. Canadian native Jeff Martin has exhaustively demonstrated his latest band's powers on stage, whipping up a hurricane of east meets west blues rock in a tour schedule that makes most bands seem lazy by comparison. The Armada - once described by Jeff as 'three tangents in a framework' - includes Irish percussionist Wayne Sheehy and Perth bassist Jay Cortez. The trio, pooled together from different points on the globe, now based in Australia full-time, has enjoyed the vast majority of their success locally.
Singer and guitarist Jeff Martin - although dropping our original interview slot in favour of a few beer sandwiches (minus the bread), more than makes up for it the following day when I finally catch up with him, detoxed, jovial and sharing a few thoughts on personal successes. "Ah, well we had good cause to celebrate, you see." Jeff explains of his earlier absence, "I don't know how many shows I've done in my career, but I have to say, I think that night was the best one I've played in my life." Good thing too, the concert in Sydney two nights previous was recorded for a planned DVD release. "I felt a real coordination, if you like. The three of us were on fire, the audience was on fire, and just to be able to pull off what we did with all the different instruments and all the moods and emotions was one of my proudest moments."


Despite some criticisms of the Armada's 'confused direction' in concert, Jeff seems to have greater confidence than ever before of his new band's abilities. "All of my dreams and aspirations as far as were I wanted to go after The Tea Party are done and dusted with The Armada. It's a tangible thing too. I mean the people around me have all been saying, you know, something's changed within me. It's like the stars have all lined up at long last." He laughs. 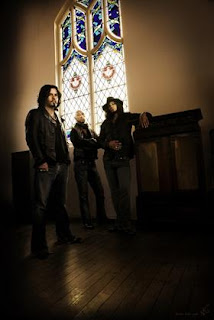 Another change or at least recalibration fans can expect is The Armada in 'acoustic' mode as they have been billed on their current tour; but is it a straightforward 'unplugged' set as the billing suggests? Jeff explains. "Actually, it's just as loud as ever," He laughs, "I mean we have acoustic instruments, but it's still a rock show at the end of the day." I ask Jeff to pin point what makes this tour different from the previous one where they launched their debut album. "Well pretty much everything changes night to night anyway; we rarely play the songs the exact same way twice which is something that comes naturally from the musicianship between the three of us." He further describes, "It's like there's a signpost in every song where we all just know to recollect, but then going into the next one, we can take any journey we want while trusting each others ability to bring it all back together. It's like there's a real collective consciousness in this band."


The centerpiece of the Armada's live shows is the monstrous BlackSnake Blues which sees Jeff transform on stage into a kind of possessed conjurer - a character brought forth from his own psyche, he explains. "That song's taken on a whole new level for me, especially with Wayne's percussion - which I call the machine – it's certainly turned into some very heavy voodoo music. In fact it's fucking sinister." Our interview takes a surprising turn as Jeff begins to reveal a long time fascination with black magic and esoteric practices.


"I'm a student of (legendary occultist) Aleister Crowley's and I always will be." He says firmly. "That is a very big part of my psyche, but it's not something that I talk about very much. I do however reference it in my music as an exotic subject which I find worth exploring." The story of Led Zeppelin's dabbling with black magic and Crowley's teachings became widely known as a strong influence on their music, a fact that did not escape Jeff he says, continuing. "When I was probably 14 I started listening to Led Zeppelin and finding out about their influences and it all seemed so mysterious to me, until I reached mental maturity and was able to, you know handle it and follow that path." Jeff later was to become friends with Jimmy Page and even stayed with him in London during which time Page enlightened Martin on the finer points of the occult. "He told me to follow my will, and what that meant was to 'do the great work' and understand my destiny. If you do that and truly find your path then the universe will basically conspire to help you." The meeting between Jeff and Jimmy would appear to have been a great success and a will to Martin's power. Yet I'm reminded of the story of David Bowie's experience upon meeting Page in the late '70s at the height of Zeppelin's black magic phase, where he apparently felt in the 'presence of pure evil' when around the guitarist. Jeff on the other hand seems to have gained purpose and confidence through Page's guidance. "You know, through him I understood why it was so important as an artist to be focused and true to yourself." Jeff concludes. 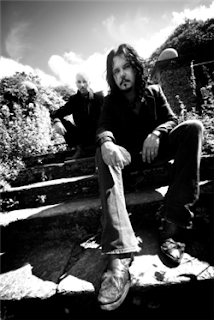 Keeping in mind Australia has been the focus of The Armada's extensive tour, before he considers taking the band to the world Jeff is awaiting his residency application to be approved. Until which time he is effectively trapped in Australia. "There are lot worse places to be trapped, let me tell you," He laughs. "It was always very hard for me to leave Australia; I have a son who was born here, and it's very important to me to become a resident. Now I just have to wait a few months until my visa is sorted out - it would jeopardise my chance of gaining residency sooner if I did go overseas - but after that I want to take The Armada to Europe because I'm very passionate about this band." Jeff adds proudly, before heading off to join his band mates and play another wild show, "I think that people deserve this kind of music, and I know that sounds like a big statement but I just want to give people the best. There's a lot of crap music out there that's being pushed, but I think audiences deserve better."

This is the second part of two interviews I've done with Jeff. The first can be viewed on my blog or on The Armada's official site (Just follow the link)...