Possessing one of the sweetest voices in contemporary music, meant Isobel Campbell slotted rather neatly into Glasgow folk-pop ensemble, Belle & Sebastian – the band she started with former lover, Stuart Murdoch - but just slotting in, by her own admission, was never Campbell's intention. “Nah…. holding back has never been something I’m particularly good at.” Isobel left Belle & Sebastian in 2002, having provided them with their biggest hit, Legal Man just previous, and emerged from her Gentle Waves solo side-project to finally record under her own name from 2003 onward. Meanwhile, across the Atlantic, a serviceable grunge act called Screaming Trees had ended their ten year run with a whimper, and brooding front-man, Mark Lanegan was part-timing with Queens Of The Stone Age. Seemingly adverse to maintaining another full-time band, Lanegan stuck to his 'casual basis only' habit all decade-long, leaving a trail of collaborations in his wake. 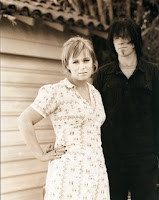 Lanegan's reputation as a sleeping bear never reached Campbell ahead of her request for Mark to 'sing on a couple of tracks she'd written'. The voice she had in mind for her songs was, 'that guy from Screaming Trees', knowing nothing of Mark's volatile nature and problems with addiction. Campbell simply says, “All of us have something or other to contend with… I believe”, and whether or not his demons affect their creative output, Isobel maintains, “Everything affects everything else, doesn’t it?” Her attitude to Mark is based on mutual respect and certainly Lanegan displays uncharacteristic warmth in Campbell's presence during rare joint-interviews. Their collaborative efforts to date amount to three acclaimed albums, the last of which, Hawk, released in 2010 spells the end of their partnership. Looking back over their work together, Isobel's lasting impression is, “I would say 99.9 percent of the time we saw eye-to-eye musically. We trust and respect each other a lot, and I think that is pretty obvious by the music we made.”

Isobel and Mark's work has allowed Campbell much greater expression. She utilises their shared vocal lyrically to direct a conversation, often willfully personal, courting comparisons with Serge Gainsbourg and Jane Birkin's explicitly charged duets. In her writing, Campbell has addressed the messy break-up with Belle & Sebastian's Stuart Murdoch, but she's equally at home playing fictional storyteller. “Sometimes it can be a vent for things, yes, but sometimes it is just pure fantasy. If the song is for someone in particular then I usually have their voice in my head, but usually I just concentrate on writing a good song and that may or may not tell some kind of story, or reveal something about me, but either way it's some form of personal expression.” Although Campbell and Lanegan's last tour winds up this year leaving Isobel to pursue new collaborations, she reveals a long-term retirement plan she hopes will include Mark.

“I think when we're really, really old it'd be nice to get together one more time and do something with our combined history and the experiences we've had separately as well.” She laughs, “I'll be like Mark is now – kind of broody and dark – and he might have mellowed out, so it could be really interesting!” While Campbell fantasises about possible future role reversals, she reveals exactly what their current collaborative roles are. “Mark always says I am the head and he's the body in this arrangement. He likes to leave the thinking to me. I think it's worked out well though  because, I was really willing to be that person and it suited Mark also because he needs somebody  to push him to work sometimes.” Geographically, Isobel and Mark are closer now than ever – Campbell recently moved to LA, while Mark calls Washington State home – but her shift to the US has offered Isobel new opportunities, helping her transition away from the safety net of the Lanegan collaborations.

“I'm really proud of the three albums (I made) with Mark, but that cycle is completed for now.” The musically fertile Arizona desert, unlikely as that sounds, drew Isobel in. “I've found it's the perfect place for me, being from Glasgow, you can't get a greater contrast. Also, I've fallen in love with the music scene out there.” She reveals, “I've been writing with a singer called Victoria Williams, and our record is about half done now.” She adds excitedly, “ Calexico play on some of it, as well who are just amazing, but as for what the end product will sound like, I will quote Victoria, who always says…. 'We’ll see….', but you just know she has it all mapped out in her head.” Both Mark and Isobel have grown considerably through their in-obvious bond, and certainly a great deal more than if either had stayed within their respective bands. Between them they've forged one of those, for all intense and purposes, mis-matched duos who like, Kirtsy MacColl and The Pogues or Nick Cave and Kylie, although usually short-lived, we continue to have an enduring fascination with.