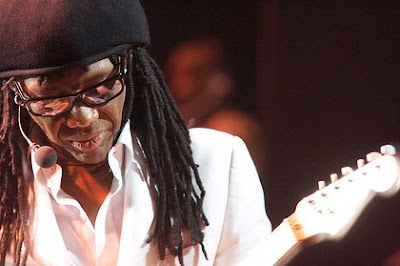 Whenever the subject is music, and no matter how banal it might seem to the eve’s-dropper, you’ll always find me tingling in a nerdy haze as the speaker proffers some tidbit or insight that might be new to me. You see, I think about it all the time (as George Michael once confessed, although regarding an entirely different subject), and can usually hold my own in a frothing discussion about anyone from XTC to Right Said Fred. However, us music trivia tragic’s sometimes encounter a golden egg-laying goose of such magnitude, we can do nothing but mentally drop to our knees and bow, chanting, “We’re not worthy… We’re not worthy!” In the last three or so years alone, I’ve had insights into some of music’s most intriguing characters during interviews, but an encounter with one Nile Rodgers at an in-store Q&A session would instantly overshadow even the most tingle-inducing sound-bite. 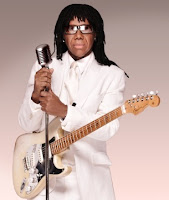 Rodgers’ was in town to promote two things; His career retrospective in concert along with Chic – the band he was best known for – and his new autobiography. The addition of a music shop meet and greet session allowed fans to ask the man himself the stories behind the ridiculous amount of hit songs he helped create as a writer/producer, as his discography will contest. Although the most remarkable story Nile shared with the hundred or so fans piled into Polyester Records tiny city store, was not of his involvement with music at all, but of pure survival against some pretty heavy odds. At just 13 years of age, his mother – a New York native living in near-poverty – became pregnant during her first sexual experience. Nile recalls interviewing her for his bio with grace and wit, but the reality was quite shocking. A failed backyard abortion resulted in Nile’s unwanted birth, and as everyone held their breath for the stories conclusion, he hits us further with tales of a childhood spent in foster care and criminal activity.
The one beacon of hope in Nile’s young life was music, and a pure imagination which he described as vivid beyond most of our comprehension. “I sound-tracked life in my head.” He claims, “I would be out playing with the other kids and I would hear music in my head every single moment of the day.” Over the course of his eventually charmed life, Nile seemingly was in the right place at the right time with unnerving regularity. Following his nightclub debut with The Big Apple Band – who became Chic, once the BAB name was ‘borrowed’ by a more well established act – Nile got his big break. The Chic song, Everybody Dance became a massive club hit, earning Rodger’s the respected title of the “Everybody Dance guy” for a time. “People would come up to me, all smiles, and be like; “Hey brother man, I can’t believe I’m meeting the Everybody Dance guy!”

Nile is sat with his guitar at the ready, and his talk is punctuated by bursts of whatever song he’s in discussion about. “Diana Ross made this one famous”. He smiles, as I’m Coming Out leaps from the amp. Rodger’s in his best Diana Ross falsetto sings; “I’m coming out, I want the world to know, got to let it show…” Recalling the moment of inspiration for this song, Nile is side-splittingly hilarious. “I was in a gay club, and it was just after a show with Chic – I’d say it was early 1980 – I went to the bathroom and while I was there, I noticed three drag queens - all dressed as Diana Ross - standing next to me peeing!” The image is so outrageous, laughter suddenly fills the air. “I thought to myself, I gotta write a song for Diana Ross, she must be huge!” The single was written and to this day Ross begins every show with it, Nile tells us. One fan asks about the hidden meaning, in some of Nile’s songs, to which he replies, “The meaning of I’m Coming Out… That was the only song I ever lied to the artist about! Diana Ross asked me was it a gay song, and she was worried what that might do to her career, can you believe it?” He laughs, “All I said was, it’s like you’re ‘intro song’… When you ‘come out’ on stage, this is the song you come out playing – it’s like ‘I have arrived’!” He enthuses. “The record company thought a ‘gay song’ would be career suicide, so I kept quiet about that, but you know what Diana Ross’s biggest record is to this day…?” Rodgers smiles the smile of a man who subverted the clueless record label honchos and is met with more cheering and applause. 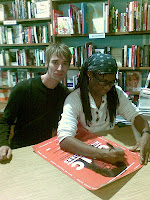 Although we could have happily stayed and listened to Nile freestyle about making deals with gangsters to secure artist contracts, surviving cancer or dropping acid in central park – “every step I took, the buildings and trees took a step with me” – but his tight schedule cut in to what was nothing short of a feast for the ears. “One last question,” He says, irritating his tour manager. A fan asks about David Bowie and Nile’s involvement on Let’s Dance. “You all know this one, right?” Cue Nile and one hundred joyous music nerds crooning Bowie at the top of our voices, as bemused onlookers flocked to the window of the shop to see what all the racket’s about. Nile ends his visit by personally meeting with and signing stuff for everybody who came to share in a little bit of his story, yet it was the camp-fire sing-a-long conclusion of Let’s Dance, that trumped just about everything. It was quite simply one of the most remarkable live music moments I’ve had here in Melbourne despite all the cramming in of gigs after gigs. Nile shared some of his life’s most amazing moments, but more than that, he gave every one who turned up to see him an amazing memory of their own to take away. 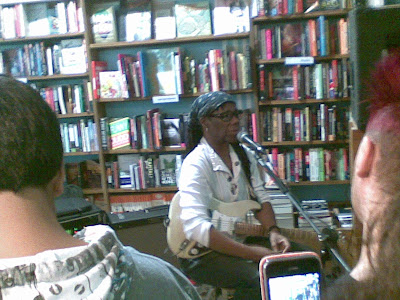