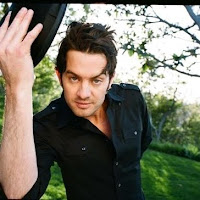 Garret Dutton - better known to the world as G Love, together with his band Special Sauce burst out of Philadelphia in the mid-90s with a cocky new twist on the cities celebrated blues and roots history. They fused a jagged edge blues sound with hip hop lyrics at the time when a new wave of acid jazz bands was in fashion. Their 1994 debut album was a summer smash in Australia - thanks to the swinging Cold Beverage single – and since that time, Special Sauce have never once overlooked Australia come tour time. With a new Oz only album to promote, Long Way Down, G Love is getting ready to open up his special sauce all over the country as we talk of his exclusive new disc.

“You know we always have a great time in Australia, so putting out this album for you guys meant that we’d have an excuse to come and play soon. We just confirmed the dates and venues, so it’s all locked in now.” Given his love of rhyme and that sense of fun in his music, I’m not surprised to hear G Love talk almost in rhythm as though he’s half consciously composing songs in his head; “I am actually working out some new songs at the moment. When we get back from Australia we’re going into the studio to record what I’m thinking is going to be our dopest stuff yet. I can’t wait to get these tunes down, man I feel like I’m having a creative peak right now.”

The live show is set to include some of G’s brand new work, as well as all the fan favourites; “We like to mix it up, you know, I always try and let the mood judge what we play or how even we play, but then there’s a bunch of songs we always keep in the set like, Hot Cookin’, Booty Call, Cold Beverage and Baby’s Got Sauce because they’re fun and we always get asked to play ‘em, but I’ll also drop in some hot, hot new songs.”

The new Australian album, Long Way Down is fairly old news to G Love, being as it’s a composite of the ‘best bits’ of his last two US releases, (Lemonade and Superhero Brother) and some never-before-released tracks to boot. “The thing with Long Way Down is it’s actually a pretty cohesive album despite how it came together. You kind of go on a little journey with this one, starting with Peace Love & Happiness and ending with Superhero Brother.” You get the vibe that G Love is a fun lovin’ man of simple pleasures – he likes the custom made songs to soundtrack the good times - even his more serious jam, Peace Love & Happiness (actually about the US military’s occupation of Iraq) is perfect sunny afternoon playlist material. Is it OK to call it a protest song, though? “I’m worried about the shit that my country is involved with for sure, so I definitely don’t mind if people think of it as a protest song. Superhero Brother on the other hand is a bit more chilled, it’s a song that came about after one of those silly conversations about what would you do if you had all these amazing super powers and that, so the album ends on a more optimistic note, I guess.” That track on first listen immediately makes me think of people like Bono and Bob Geldof elevating themselves to saviors of the third world, is there a subtle swipe at giant pop star egos going on there? “I’m aware of how kinda pissy it looks when these mega-rich dudes use causes to raise their profile, so my song has a kind of tongue in cheek look at that but also, I feel that people who have a certain amount of privilege in life maybe should be thinking about how they can make a difference.”

Recently G Love joined the roster at Brushfire records, which he shares with Donovan Frankenreiter and Jack Johnson. The latter of who recorded some of his strongest material with G Love on Philadelphonic (2004), Does Jack still feature in G’s creative life? “We toured together along with Donovan quite a bit, and we’re more like good buddies than collaborators, you know. Jack and I both love surfing, so we would always take our boards out together on tour and just spend the day at the beach before a show, so it never felt like just a music thing.”

Naturally, Garrett is packing his board for his upcoming shows in Oz – you might even catch him down at St Kilda beach checking the conditions. “Oh yeah, I’ve definitely planned get some surfing in on this tour.” He says, excited at the thought. “We’re gonna be hanging around for quite a while this time ‘cause Australia’s just awesome for surfing.”