News of Charles's death at the Pukkelpop Festival in Belgium has just broken as I write this. I was lucky enough to interview him for the band's first Australian tour due to take place in October. Despite much of the interview's irrelevance in terms of future activity - I wanted to share the results of one of Charles's last promo engagements for fans who would obviously be shocked, as I am, by the loss of a such a young talent who had so much potential.


If you like your electro-pop big and brassy with '80s-centric instant hooks, Ou Est Le Swimming Pool (translated as: Where Is The Swimming Pool?) won't have escaped your radar. Although emerging from the same area of London that produced Pet Shop Boys, this is a mere coincidence for the band, who despite sharing a musical kinship with the Pets', claim no formal knowledge of them. Ou Est Le Swimming Pool's massively popular debut single Dance The Way I Feel, along with a tour opening for La Roux, has earned them a spot on this years Parklife festival alongside dance heavy weights Dan Black, Bag Raiders, Groove Armada and Missy Elliott to name a few. 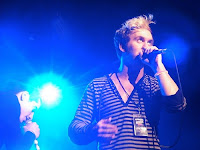 The band's mouthpiece, Charles Haddon along with his splendid bouffant of hair, is in a talkative mood on the eve of his band's first visit. What are we in for though, I wonder after a trawl through group's online video diary, which shows a group of lads fully in touch with their mischievous sides? "You've gotta do it haven't you" Charles laughs, "There's so many bands around who take it all very seriously, but we've already got up to a fair bit of trouble." Now that Oasis have split the position of 'showing off and being arrogant' is vacant, so perhaps they're the ones fill it? "There are a lot of record companies who won't touch a band who have any kind of reputation for bad behaviour, they just want somebody who's going to turn up and stand on stage and play and then go back to their hotel room and eat fruit." Charles jokes, "But we're actually very proud that we can at least enjoy ourselves as well as get the work done." 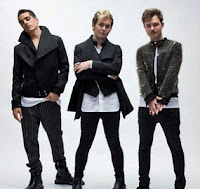 It's been just over a year since Ou Est Le Swimming Pool formed in Camden, (North London). Charles recalls the early days of the band and how it could've been a totally different sound that launched them. "Me and Joe (Hutchinson) were doing completely different music in the start. Joe was right into hip hop for example". Charles explains, "He and I were sharing a flat and had all these music projects happening – one of those became Ou Est Le Swimming Pool – so when that started to take off, we dropped all the other stuff we were doing and focused on this." Not a bad move either, the bands debut single, Dance The Way I Feel enjoyed a thorough remixing by Armand Van Helden and instantly put it's creators on the map. Charles says of the bands overnight success on the back of the debut single; "I get that it can be hard to follow up a first rush like that one, but I believe we have plenty of great music." He says, "I mean Dance The Way I Feel was chosen by the record label to be released in Australia ahead of our tour, but I think we have a pretty solid bunch of songs easily as good as that. I'm pretty confident we can that follow up for sure."

Charles claims he knew very early on he wanted to pursue music as a career. He continues, "At the age of about 13 I realised that I wanted to do music, and unfortunately my school work was crippled by that decision." He laughs, "I was actually a scholar when I was younger, but then I ended up getting expelled because I was bunking off all the time. It was good in a way though because I immediately moved to London and started making things happen, wasting no time really." Last year the band embarked on their first tour as opening act for La Roux. It allowed them, as Charles points out, a chance to sharpen up their sound for the inevitable headline shows. "Yeah, La Roux gave us that important live exposure, and allowed us to work out a strong set list of what to actually play in our shows - because we've got about 40 songs written for the first album - and it's hard to pick just seven or eight. I'd leave home thinking we had a perfect set list, but after the first night we ended up changing, like three, so it was a great learning curve for us."

Similar to La Roux, Ou Est Le Swimming Pool have been saddled with the typical '80s revival tag, but Charles reckons working with vintage equipment, "It's all we could afford", has much more to do with their sound than revivalism. "I'm not much of an '80s fan, the only reason we sound the way we do is because our synths are old 808s and our drum machine which we were using, initially came from the '80s. The hip hop stuff that Joe and I were into didn't work at with the equipment we were using so we altered our sound to fit with what we had to work with." On the subject of comparisons, he continues. "When we started we were compared to Depeche Mode and Pet Shop Boys but the only Pet Shop Boys song I knew was Go West because it had been on an advert in England for custard, so I had a pretty skewed idea about what people were hearing in our music." He laughs.

Like so many people of his generation, Charles' earliest musical love was the pop star's pop star; take a bow, the king. "Michael Jackson's History, was the first album I had as a kid," Charles says proudly."I remember my family were moving house and we didn't have anywhere to live for a couple of weeks so we just drove around England, going to sea side towns and stuff, and I can't remember how old I was but I think I cried if we didn't listen to Michael Jackson and my poor parents must have hated him by the end of that trip, because it was two solid weeks of the best of Michael Jackson." They've been wrongly tagged '80s revival, had a false start as a hip hop band and one of them has Jacko fixation, but what do Ou Est Le Swimming Pool all agree can go on the all important tour bus stereo? 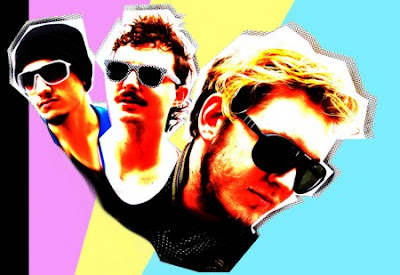 "We all have one major love which is a '70s reggae band called Culture – they are absolutely ridiculous, I mean it's just really chilled out songs about smoking pot." Charles exclaims "After seven hours in our van on the road, we need something to calm us down otherwise everyone tends to get a bit agitated." Would Michael Jackson's History revisited cause a few tempers to rise, I wonder? "I think that album was thrown out by my parents actually, or maybe even driven over a few times." Charles smiles, "Thanks for reminding me, now I'm gonna have to get a new one."

As a draw card at this year's Parklife festival, I ask who Charles and his band are most keen on whooping it up with. "I'm quite looking forward to Dan Black. We've played several gigs with him before, but we haven't seen him for a while and he's going really well now. He's such a nice guy too, he even let us get up on stage and dance with him a couple of times." Charles continues, "And, now I've said this before, but I'm definitely going to be best friends with Missy Elliott… She doesn't know it yet but by the time that festival finishes, no by day two, she's going to love us and I reckon we're going to be riding in her limo and her private jet." He reasons, "Plus she's going to pay for everything so we can just go nuts." Charles laughs adding, "If there's one thing we've got as a band its enough confidence and cockiness to pull this off!"

lEIGh5
I think this interview shows clearly that Charles had a fun loving, boisterous side to him. It's  so sad that his darker side was the stronger. A lovely guy who leaves a short-lived but exciting legacy in the dance music scene.