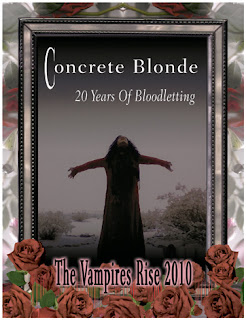 In the twenty years since Hollywood natives Concrete Blonde released their defining album, Bloodletting, interest in all things vamp has skyrocketed, perhaps loosely benefiting this once nearly forgotten group. The title and content does reference Anne Rice's Vampire Chronicles, true, but the songs on Concrete Blonde's third album were never meant to be taken as literal tales of the freaky un-dead. Addiction and consequence were the songs thinly disguised subtexts – many of which were veiled pleas from the band's singer/bassist Johnette Napolitano to the people closest to her, including the rest of Concrete Blonde. But original drummer Harry Rushakoff and, to a lesser degree, guitarist Jim Mankey's substance abuse basically sunk the band less than four years after Bloodletting broke them out of obscurity.
In the last decade a rehabilitated and revived Concrete Blonde delivered the self-reflective 2002 sobered-up sequel to Bloodletting, Group Therapy and found their way out of the haze and put the wasted years behind them. Last year Napolitano paid a fleeting visit to Melbourne to test the waters with a small-ish solo gig and seemed genuinely surprised by the amount of slavering fans turning up she could still lay claim to. The time was right for her long-awaited musical return and both the artist and any fan despairing over Johnette's fellow Californian, seemingly plague proportion pop bitches, felt it at that show. 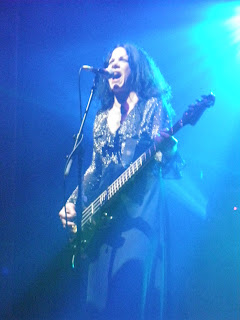 Napolitano is one of a dying breed of front-persons which has helped to keep her in good stead despite years of relative obscurity. The Concrete Blonde faithful don't waste any time - or volume either - in letting her know how much she's adored tonight at the Palace, as the dirty opening bass chords of Bloodletting's title tack are beaten into our ears. Australia was the first country outside of the US that Concrete Blonde toured, prompted by the album's reception here, and specifically the second single, Joey. It receives no encore placing either, but rather runs straight out of Bloodletting's feedback finish. Joey, like much of Bloodletting, runs at a mid-tempo pace, so the band hurl in a few bigger-sounding rock crowd-pleasers from other albums. Breaking away from Bloodletting - so far in running order - God Is A Bullet, Happy Birthday and True from Concrete Blonde's late '80s period, are especially well received.

Tonight's support band Graveyard Train had been the perfect pre-cursor to Concrete Blonde. The eight-member gothic blues group whipped up a bone-rattling storm that Johnette and co. rode in on, harnessed and wrestled into submission. Continuing their diversion from Bloodletting, the band haul Graveyard Train out from backstage to join them – as a kind of ghostly choir - for a momentous romp through Ghost Of A Texas Ladies' Man . The night was almost stolen by this near-forgotten single from the band's Walking In London album. The thrills were far from behind us though, and as Leonard Cohen's Australian live dates approach, a reminder that if he wants his song, Everybody Knows back from Napolitano, he'll need to pick up his game. Following that, a surprising cover of Hendrix's Little Wing gives guitarist Jim Mankey a chance to indulge himself a little - but not to be outdone, a barefoot Johnette indulges us all with some spirited flamenco dancing during two cuts – Heal It Up and the title track - from Spanish-flavoured album Mexican Moon. 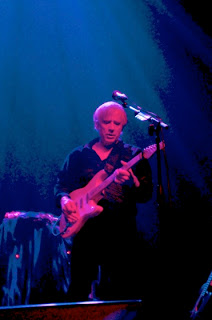 The return to the Bloodletting tracks actually means some lost momentum built up over the side serving of nostalgia, a fact not lost on Johnette as her movements become noticeably exaggerated, including plenty of compensatory eye-bulging and eye-brow raising. The album was always more 'eight-parts-soulful and two-parts-rawk', so the decision to drop its beefiest moments – The Sky Is A Poisonous Garden and The Beast – is a very odd one indeed. The concert felt just a little incomplete from those song's omissions, but the frankly pissed-and-out-of-control audience don't seem to mind, especially once the stand-out sing-a-long moment Tomorrow Wendy begins. Johnette's near-accapella reading of the albums only cover track (it was an Andy Preiboy song) is a seriously powerful end to the set. Concrete Blonde receive a deafeningly raucous hand on their exit which is sustained for a good five minutes before the final encore of It'll Chew You Up And Spit You Out, which again is out of step with the mood built up by Tomorrow Wendy, but is no less a satisfying all-in-rock-out for the group and fans.

Although the running order of the songs needed a rethink, it feels like a triviality when in the presence of Johnette Napolitano, who never once failed to be completely mesmerising. Drummer Gabriel Ramirez and guitarist Jim Mankey made for outstanding accompaniment, but it was Napolitano's show for her sheer authority as a vocalist and bass player. The 20 Years Of Bloodletting tour winds down soon and the demand for them to tour again may never be overwhelming enough but Concrete Blonde proved tonight they are much, much more than just a 20 year old album.
lEIGh5 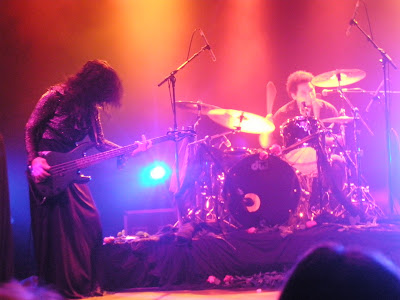 THE PALACE SETLIST: 22/10/10
BLOODLETTING
JOEY
I DON'T NEED A HERO
DAYS AND DAYS
LULLABYE
SCENE OF A PERFECT CRIME
GHOST OF A TEXAS LADIES MAN
SOMEDAY
EVERYBODY KNOWS
CAROLINE
WHEN I WAS A FOOL
GOD IS A BULLET
RUN RUN RUN
LITTLE WING
HEAL IT UP
YOUR HAUNTED HEAD
MEXICAN MOON
HAPPY BIRTHDAY
TRUE
TOMORROW WENDY
BEDS ARE BURNING
IT'LL CHEW YOU UP AND SPIT YOU OUT
Photos by myself and Fruitbat
Posted by lEIGh5 at 1:20 AM