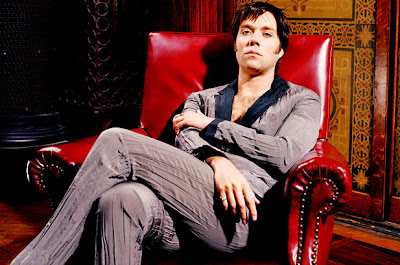 
In the time it takes many artists to work out what they want to do/say with their music to leave a decent mark, Rufus Wainwright crammed practically a lifetime's work. His un-relenting recording/tour schedule over the last decade, it has been suggested, is the result of the ethic bestowed upon him by his doting mother, Kate McGarrigle. At 14 Wainwright first performed with his legendary (in folk circles) mother and her sister Anna as part of the family's regular jaunts around Canada and America. These concerts, incorporating lengthy sing-a-longs to everything from Kate and Anna McGarrigle originals to depression-era anthems, helped build young Rufus into a confident 'old-hand' with an appreciation of his musical history. The importance of his mother's influence can't be underplayed when appreciating Wainwright as a performer in his own right, and so her death at the start of this year has obviously impacted greatly on his current stage show. 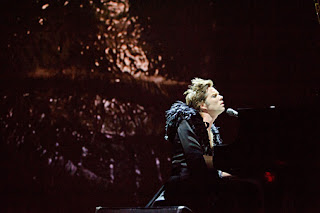 Rufus's solo return to Australia – his first visit since January 2008 – comes straight off the back of the Wainwright-penned opera, Prima Donna, which also seems to have had an influence on his concert presentation. The first indication that this was not going be your regular-type live show was the request for absolute silence during the first act – the current album All Days Are Nights: Songs For Lulu in complete form – and no applause between songs or until Mr Wainwright has completely left the stage. Sounds easy enough in theory, but over the course of the show a bizarre tension builds in the capacity crowd. The room suddenly falls silent as the curtain raises and we are faced with an almost completely blackened stage bar one spotlight above a baby grand piano positioned on the far right. A few gasps can be heard as a barely visible figure slowly emerges from the left and pads slowly and silently across the stage. In the darkness, a long flowing black garment with a shoulder bustle takes shape as our eyes adjust to the low light; then with cat-like grace, Rufus lowers himself onto the piano stool and elegantly and tilts his face towards the spotlight. He freezes with hands poised above the keyboard and the whole place draws its breath as one.

Before a note is even played, the sombre mood is set for this recital and all that's left to do is maintain the composure Rufus has requested of his us. He performs Who Are You New York? – the album's opener – and stops only briefly between songs until the final track, Zebulon. For the most part, we sit in a kind of outward silence as our minds fill with imagery and impressions of what we are witnessing. The most rewarding part of sustained silence, in any case, is an exaggerated awareness and with All Days Are Nights being such a personal and difficult album – both technically and conceptually – the emotions start to run high. The fruity, Judy Garland-singing Rufus we knew so recently, appears now as the cloaked apparition of some deceased opera singer, doomed to perform for muted, passive theatregoers. Of course transforming himself this way is all part of the recovery process of losing his mother, but it's also an exercise in restraint and the want for his audience, to not only see the live concert experience as a way to forget about trivialities but perhaps to re-think what we call trivial and what we take for granted. 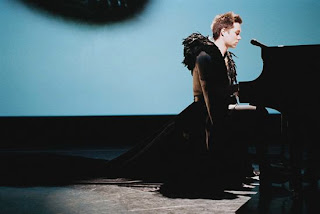 Even Wainwright's positioning on stage seems significant after a while as the backdrop gradually fills up with mournful, heavily made-up eyes blankly staring out into the auditorium. He's made himself into a spectral, barely visible figure and turned the gaze onto us, effectively reversing the standard performer/audience roles. The melancholy tunes, many of which are derived from Shakespeare sonnets, are some of Wainwright's most demanding, from a listener's point of view, as well for him to perform. He has created with Songs For Lulu an exhaustive regime of classical pieces basically designed to torture the artist's concentration level and force audiences onto the edge of their seats. I would like to say he made it look easy, but Rufus demonstrates through this act the extremely high standard he sets himself – again a by-product of his mother's influence at a young age. And then there's that voice – Wainwright's instantly identifiable nasal/croak which - when described, sounds far better to the ears than on paper - riding over the octave scale in implausible fluidity. Also it's rare for him to dig into its lowest register, but tonight many a long guttural note punctuates the air in between those operatic highs. 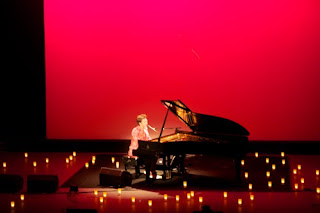 At the end of act one, Rufus exits just as he entered – a shuffling ghostly figure, oblivious to the packed room barely restraining themselves from applauding until he is completely gone from view. The curtain falls and Wainwright's devotees erupt with gratitude, relieved to finally break their imposed silence. The next act is a much more relaxed, 'hits-and-favourites' set – with the comfort of welcomed applause and friendly banter thrown in. When Wainwright re-emerges, he's clad in orange tights and a pink scarf, while the crying eyes have been replaced with a deep, red sunset sky. He fairly skips onto the stage grinning and all memory of the first act has been unceremoniously eradicated. However the audience are not so quick to be distracted and now await Rufus's word on whether to applaud after some awkward silences between songs and comical stories of his adventures in Australia. Stunned as we were, I note that one benefit from act one's vocal workout is the ease at which Rufus sings his more familiar pieces. It was his best Hallelujah, his loveliest Art Teacher and his finest Poses, all thanks to Lulu and her demands on his voice.

This tour will no doubt become his most heavily criticised work – after all it was an extremely self-indulgent move, but fuck it, give me that kind of drama and theatrical pomp over wilting wallflowers or sulky indie boys any day. Wainwright has always been about the biggest wow and cockiest strut, so it stands to reason that this sad time in his life has bought out a no less extreme side to him. It may take him a long time from now to feel it himself, but from a watcher's view point, the man is totally and utterly fearless.


WHO ARE YOU NEW YORK?
SAD WITH WHAT I HAVE
MARTHA
GIVE ME WHAT I WANT AND GIVE IT TO ME NOW
TRUE LOVES
SONNET #43
SONNET #20
SONNET #10
THE DREAM
WHAT WOULD I EVER DO WITH A ROSE
LES FEUX D'ARTIFICE T'APPELLENT
ZEBULON
ACT II: