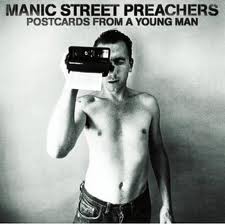 Before its release even, the latest Manic Street Preachers album was heralded with a kind of surrender entirely out of character with the band; "Last Chance To Get Our Message Out There" was the cry from within – and what could that possibly mean for an act eleven albums old, and seemingly cursed and weighed down by misfortune and unpopular viewpoints? Were they surrendering or posing a threat? If they truly are considering a break-up, their detractors can at last say 'saw that coming years ago', but this possible last chapter in the Manics story will in no way be a bitter one for fans, who can comfortably celebrate Postcards... as one of the band's strongest albums in their 24 year career.

The Manics have survived against some pretty big odds all along. Missing-presumed-dead members, songs built around socialist meanderings and obscure literary references, (surely enough to drive many a  rock fan away?) but mostly a lack of broad, consistent interest. The Manics could easily be saddled with a 'glory or death' tag, but their refusal to be defeated even in some pretty glory-free times means either incredible unity within their ranks or sheer stubbornness has kept their fire burning. Which ever is true, I'd back them over a frothing Beta Band, a rearing Catatonia or a six-legged Super Furry Animal any day.

The Welsh trio have remained largely unchanged musically since first injecting their melancholy punk anthems with a little stadium pomp on 1996 classic, Everything Must Go, but subsequent releases often struggled to match that album's rich offerings. All but the hardcores probably shrugged at the band's post millennium releases, which up until last year's outstanding Journal For Plague Lovers, were met with little acclaim, but Postcards From A Young Man is a vital sounding push to the front of a once disappearing line, and the sound of a band mad at themselves for resting too long on their laurels.

All of the regulation MSP fare is still present in 2010; the history book rifling, communist values, Britain in crisis etc… but these touchstones are delivered on Postcards without any of the awkwardness of the sometimes over-wordy early records. Confidence reigns and, although orchestras and choirs feature throughout this album, a lot of the excess fat found on such releases as 2000's Know Your Enemy, for example has been shed. You can almost hear the conversation between Bradfield, Wire and Moore as they embarked on their 'last chance' effort, which probably concluded with a remark close to 'never mind the bollocks, let's just make the album we've always wanted to'. Whatever thoughts they indeed had, this band knows its true strengths and unabashedly plunders them for all they're worth. The title track for starters is almost a cobbling together of the 'old' and the 'new' Manics' sound, acting as an awareness-metre of how much they have grown musically over 24 years. It also tidily announces the album's concept - the artist's present selves weighing up the value of progress against their past selves' quaint existences.

Being a Manics record, of course they're cranky about mindless consumption over elementary pursuits - and they've never written more clearly on the subject. Take A Billion Balconies Facing The Sun for example – guest bassist Duff McKagan (ex-Guns 'N' Roses) adds some fat 'n' heavy licks to Bradfield's no-nonsense rail against online bullying. It's worth noting that McKagan's presence, along with other guests Ian McCulloch (Echo & The Bunnymen) and John Cale, is down to a few Manics' childhood dreams being fulfilled. If you'd ever wondered who they count among their heroes, (Stephen Hawking was busy), there's the top three. Ian McCulloch's duet on Some Kind Of Nothingness – actually the dark twin of Kylie Minogue's Some Kind Of Bliss, which the Manics wrote for her - is celebratory, but one of the less impressive moments overall, in spite of the tricked out full choir backing. Cale meanwhile is more impressive on the Radiohead-esque, Auto-Intoxication, adding keys and 'non-descript noise' to this track about being slaves to the world wide web.

The album's powerful rock 'n' prose single, Its Not War (Just The End Of Love) – a paean to the media-driven divide between East and West - and All We Make Is Entertainment are probably the ripest fruits on offer overall. But following run of (what would be) easy choice singles - take your pick of Hazelton Avenue, Golden Platitudes, The Descent - the album hits you with a kicker of a finale - the beautifully titled Don't Be Evil, which makes me want to praise and damn them for the same reasons. There they go, being all articulate and irritatingly correct about lost humility through online social networking, the old grumps. But damn them if they aren't right on the money with this, and damned if any band's who've actually sprung up in the internet age could nail this topic so accurately and awesomely as the Manics have. Not satisfied with this triumph alone, it also happens to be one of the best rock songs of the year.

Yes, there is a vague, unsurprising concept running through Postcards From A Young Man, but it never feels whiny or self-important. As much as it is an album concerned with our increasing reliance on the virtual/digital world, it equally mourns the lost art of tactile communication and by proxy, the band themselves have whole heart-idly reconnected with their audience.

"Postcards From A Young Man" video.