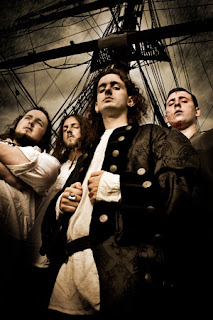 DAVEY JONES' ROCKERS
If you've ever thought what's been missing in metal for years is the unbridled spirit of drunk-sounding, burly Scottish men in pirate costumes, my friend you are in for a treat with Alestorm. Their two albums so far, Captain Morgan's Revenge and Black Sails at Midnight have seen this band from Perth, Scotland forge their own path in the battle metal genre… By dressing and performing as pirates. Tonight, the not-so-sinister Captain Chris Bowes is - after a few ales - at the helm and ready to cast one good eye over a few questions on why life as a drunken, moroding, wench-chasing pirate rocker was so appealing.
"Because Scotland is such a fucking boring country, so you might as well start a band and pretend you're a pirate." The singer says, as a matter of fact. Seriously Scotland suck so many balls. Rubbish place. Chris continues his moan after being asked his opinion on Scotland's amazing musical history. "Its all fuckers with accordions and violins playing crappy granny music. Plus the weather's shit too. There's nothing good about Scotland." A more tactful turn is needed, so we discuss Chris's songwriting. As vocalist and keytar player in Alestorm, it is also his duty to keep the piratey songs coming for the band's singular theme; "Usually after a case of beer and bottle of vodka I'll get into the mood to maybe write some stuff." He laughs, I sit down at my keyboard and start writing and these little pirate songs just come out. It's a magical process. 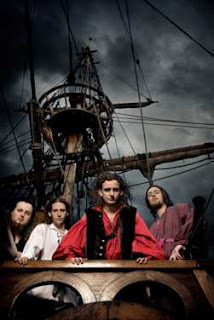 Alestorm's songs involve any and every reference to piracy you can name prompting me to ask if a serious interest in maritime folk-lore motivates Chris; "None of our songs have any basis in fact or real stories from the sea, it's all stuff you can get from movies and computer games. You know, cursed zombie pirates and sunken treasure… It's all just a bunch of dog crap really. We're just doing this for the alcohol and because pirates are cool and get to wear eye patches. Chicks dig eye patches." He continues, "One-eyed guys get way more sex than guys with two eyes, this is a medically supported fact."

Despite his off-hand remarks, Chris and his band are one hundred percent into the whole pirate schtick. The stage shows, videos and album art all reinforce the band's angle, leaving the listener in no doubt that yep, it's very piratey. Chris says of the roots of Alestorm's fixation; "When I started writing songs I just let my mind wander, and one day it wandered to pirates as a subject to write about. I wrote this song called Heavy Metal Pirates, which ended up on our Leviathan EP, and everyone was like 'holy shit this is amazing, can you write more songs about pirates?' and next thing I find myself in a pirate metal band heading for Australia." 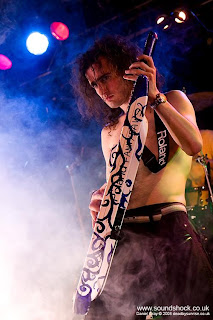 Musically, the band recalls early Dropkick Murphys, with maybe a little nod towards The Darkness. However unlike those bands, it's the keytar that dominates Alestorm's music. Chris interjects, "Oh aye, I can't play the guitar for shit, and I write all the band's songs. So of course everything I write is gonna be keyboard based. Every time I listen to most metal bands, I kinda wish they had loads of keyboards and synths and everything. That kind of stuff gives me an epic boner."

Having an image and a potential-filled theme is all a part of Alestorm's desire to stand out, Chris considers; "From a cynical perspective, too many bands all look/sound the same, so you gotta do something unique to be remembered. It's a lot of what got us where we are today." Audiences are flocking to the shows, too. This previously untapped branch of metal has developed a huge following overseas – although, Chris recons, not enough 'wenches' are showing up; "It's a fucking sausage fest, dudes as far as the eye can see. Breaks my wee Scottish heart." 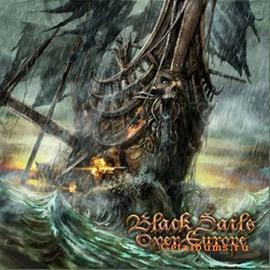 Despite this set back, he's in awe of the love his band have been shown. "It's ridiculous, I mean we've been a band for probably two, three years maximum and we've toured the fucking world now which is rather wonderful. We've done all of Europe and the Americas so now it's time to hit the Antipodean shores and conquer Australia, as we say." Embarking on new turf for Alestorm has Chris excited, he sees Australian's in general as his ideal audience; "You're all a bunch of fucking criminals." He blurts out. Considering the reputation of pirates - rock'n'roll pirates even – it strikes me that the band might encounter difficulties when getting booked to play some of your more conservative corners of the globe. Chris claims; "Nah, we're a promoters wet dream, mate. Besides we'll do a show for a couple of bottles of cheap vodka, and get a huge crowd, so everyone leaves happy." 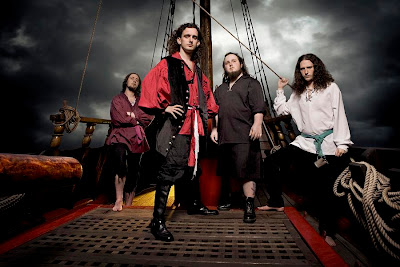 I knew this wasn't going to be just another show when what appeared to be a large pavlova cake sailed through the air out of the crowd landing on stage in front of the drummer with a tremendous splatter after just one song in. Alestorm singer and keytar player, Chris Bowes dips a finger in the mess and gives it a taste before throwing the remainder of the cake at the fans, saying "We're gonna get one hell of a cleaning bill tonight!" Anything seems likely to happen after this, and I joined the band in (probably) wondering if any more desserts were lurking in wait to be added vigorously to their rider.

Scotland's Alestorm, who by song and by appearance could defiantly shiver a few timbers, actually appear scared by the Melbourne audience's rabid response to them at the Corner tonight. I'm now certain they were expecting a humbled crowd, gasping at the primal display of ear splitting metal, instead the real brutes were in the pit en masse, dressed even more pirate-y than the band, making Alestorm appear as late comers to the party. But then billing yourself as a pirate metal band, meant that Alestorm were bound to attract your more debauched landlubber with a given excuse to drain the bar, gob all over the place, throw pavlovas and collect/deliver as many bruises as possible. The band's songs after all are about celebrating the hard living, hard drinking pirate and of course this theme has found a welcome reaction wherever they have played. It's easy to see why, I mean how can uptight emo bands or revered metal giants compete when a fan can leave a concert feeling like the band have just used you to mop the beer off the loo floor with?

Bowes, reading the crowd calls out, "Who wants to hear a song about big tits and beer?" Audience roars, Chris responds; "Good because we just so happen to have one of those!" The song of busty wenches and alcohol cunningly titled Wenches & Meade is too much for some fans and they begin hurling their bodies into each other at bone-cracking pace. All you can really hear coming from the stage is drums and shouting, but the muddy sound is a technicality really. You don't need to explore Alestorm's well crafted lyrics, but rather enjoy the simple repetition, much like listening to rhyming football chants. Despite this, Chris wisely announces each song with a massive build up so as to keep the momentum up.

As a live band, Alestorm are hilarious to watch as they deliver with such passion some pretty ridiculous anthems about beer, pillaging, Davey Jones' locker etc.. all in the single tempo of fast and raucous. Bushy haired singer Chris Bowe's voice is all angry growl, and kind of at odds with his narrow frame and feisty keytar playing. The rest of the band - rocking the beard with no moustache thang – looking as though they'd rather eat razor blades than crack a smile, played for all they were worth, but I still it felt like there was a little water in their gun powder tonight, resulting and smaller bang than maybe expected.