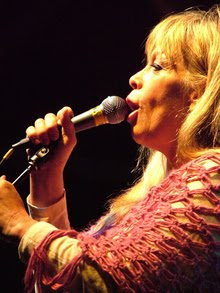 Venue: The Forum
"It's too quiet in here". Nervous laughter. "I guess I'd better play some music then." Rickie Lee Jones is gently pacing the stage at The Forum, seeming so small against the simple backdrop of fairy lights, her speaking voice so soft yet resonant in the room which although full to capacity, is also dead silent. She has just completed one of her signature tracks, Last Chance Texaco, and as the applause dies down only the air-con is audible. This factor is both awkward and mesmerising, and stems more from Jones' incredible tenderness as a performer than the audience's detachment. In fact all present seem to be enthralled to the point of transfixion as Jones works her way into our ears.

Although she has been largely missing from the lime-light for some time, Jones by all accounts is having a renaissance on new album Balm In Gilead. The jazz-pop tunes of her early career eventually gave way to experimental, electronic tracks which have sadly meant her fanbase have often not remained with her throughout. The gaps in consistent exposure have probably kept Jones' invigorated musically though, and has also meant that tonight's show is not a nostalgia trip, but one by an artist still creating and learning new tricks coupled with 30 years of experience.
I'm struck by the ease at which Jones moves between instrument and song choice as she sets up mood after mood, then just as we are hanging on each guitar chord or piano note, quickly shifts tact. The focus tonight seems to be on Rickie's most personal songs, or the songs that have come from key points in her life, as the set-ups between tracks contest. "This song was written by my father decades ago", she says speaking of The Moon Is Made Of Gold. "This next song was written about my family", (The Albatross) and so forth. 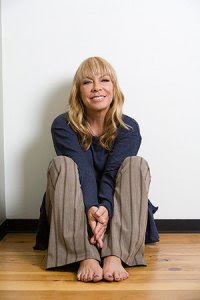 As she's performing tonight, Jones' voice noticeably alters on each song as if she's voicing characters, or perhaps even old selves revisited for the purpose of the songs alone. Her formerly tumultuous private life has naturally imbedded itself into her work, and it's only when she performs the ragged jazz number Easy Money, the memory of an intense relationship with Tom Waits in her past emerges for us to witness. Jones prowls the stage, growling and dropping the kinds of quirky names and situations Wait's career is built on. Jones freely displays an acute knack for reaching into her psyche and living out these songs rather than just playing them, and if - as I suspect - she is sharing stories about parts of her life, it's all channeled through with warmth rather than being grossly expunged.
The whole unrestrained feel of the show is further more down to there being no set list and also Rickie's swapping between guitar, piano and drums as she sees fit. At one point breaking from the flow of a track she says, "I'm sick of guitar, I think we need some piano now." On stage with her are a drummer/backing singer and a young bass/loops player, acting as both casual accompaniment and dominating force where needed. On His Jeweled Floor, the band comes together building up psychedelic noise patterns using live loops and splash cymbals as Rickie shuffles back and forth plucking her acoustic guitar. The outcome is a totally hypnotic, spine tingling finale and as it concludes, the audience, completely sullen by the track, suddenly come back to life to give a standing ovation.
Although her music has frequently been overlooked since early successes, Rickie was able to easily perform a set of relatable songs and stories and leave you feeling like she has bared her soul, but also that there's still so much more to her. Live in concert, Rickie Lee Jones was simply THE ultimate 'getting high on music' experience.
lEIGh5 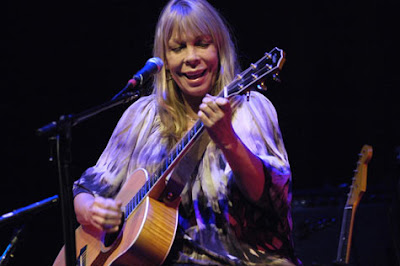