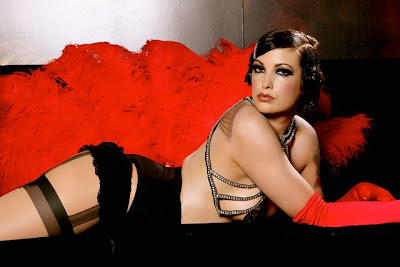 INTERVIEW WITH THE SPELLBINDER


Popular traveling Burlesque show, The Jitterbug Club, has reached the end of a five-year run celebrating all things vaudeville. The show’s originators, an eight-piece rag-tag band called The Snakeoil Merchants, in a further blow to local cabaret fans, will in turn wind down with one last explosive Melbourne show this week (April 2011). Speaking to me today is singer and master-mind behind the double-act, Mojo Juju, a kind of conduit between titillating 1930s escapist shows and modern performance art. Along side tales of drunken home-done tattoos and causing audiences to blush, she enlightens this novice on the finer points of being cabaret star in today’s world. 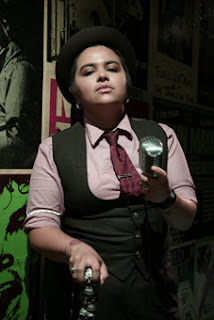 "There are a lot of performers out there who believe in what they do, and I think when you convey that, your audience can’t help but be disarmed." Mojo begins, "If you go out on stage and don't believe in what you're doing though, I think people can tell and they won’t go along for the ride with you." It's this very approach to her act that has kept audiences coming back to The Jitterbug Club's shows. Juju believes not in quaint, cheap-shock stage shows, but in bringing a sense of fun and danger back to the fore. "For me the aesthetic of what we do is nostalgic but it’s about the transference of the impact cabaret or vaudeville had in the 1930s and '40s to now. I understand that it is not exactly relevant to today, but what you wanna do is make it contemporary being a little confronting which actually still is an anomaly in live shows." She pauses, "You know, it’s not just pretty dancing girls, it has a sense of humour, and it has a shock element… Basically I want my audience to blush when they come to one of our shows." Juju laughs. I wonder does Mojo believe people perhaps like to be confronted, and if that's what keeps these kinds of shows from fading out.
"What keeps the art form alive, is understanding the impact it had in its day, and adding to that what is maybe provocative and taboo today. The differences really aren’t that great I don’t think.” Earnest performers, it seems, have always muscled to the front of the cue, while the provocateurs frolicked down the back. It's a sign of music's bizarre conservative undercurrent – a forever clinging barnacle it picked up once it realised it also had a political voice in decades gone by. Mojo believes that now is as good a time as any to celebrate the subversive when you take in to account the fact that vaudeville began in far less conservative times than ours. "We're living in very self-aware times I think. People seem very concerned with how you are supposed to behave in certain situations or out at a concert, but that leaves me feeling very stifled. Vaudeville throws all of that out the window and gives free expression room to breathe. I honestly think people are longing for that, though they don’t always know, but you see a kind of relief in audience's faces at these shows." Mojo's view on burlesque's shift into the mainstream - via a certain recent film starring Cher – but mostly through acts like The Dresden Dolls is mostly positive. She continues. 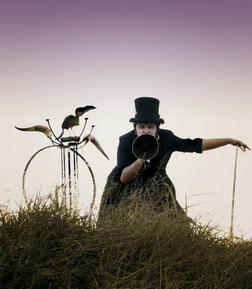 "I haven’t seen that film (Burlesque) yet, I’m a bit scared to be honest!” She laughs. “But I think people like Amanda Palmer, Mikelangelo (from Tin Star) and Mick Conway - who's one of the last true old-school vaudeville performers still out there - are incredible. They're authentic, you know – they don't use vaudeville as a gimmick. I think their work only strengthens our little branch of the showbiz tree." As a singer/songwriter and conceptual artist, Mojo by more happy accident than design, found herself gravitating to the underground cabaret scene in Australia. Once she realised her vivid ideas of stage shows were in fact a shared passion, exciting things began to happen. "I guess The Snakeoil Merchants were born in Newcastle at a time when I found myself on a kind of seachange there. There were many musicians this very small area and through several lucky chance encounters I soon had a band of like-minded souls." Juju laughs, "I remember things happening like, our saw player just getting up on stage at an early gig and playing with us with no reservations at all about not being asked" She continues, "We liked his spirit, so after that gig we drank and we drank and we drank until finally we tattooed a skull on his chest and said, he couldn’t leave the band until he managed to scrape it off!" Mojo smiles, "That's one of many weird little scenarios that happened early on and led to us forming this band."  With the band she had always wanted together at last, Mojo felt she was able to unleash her bigger plan of a full-blown vaudeville extravaganza. 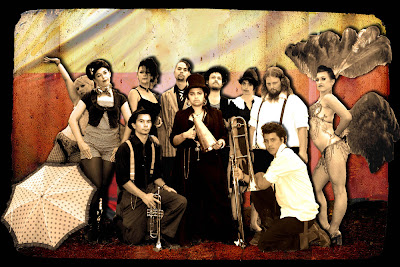 "It all started with a bunch of songs as these things tend to do, but there was more to it than that, because when I write I tend to develop the visual side to the music as much as the music itself, so with Snakeoil Merchants, I finally felt I could turn develop my ideas into a cabaret." Mojo adds that a point of frustration for her was seeing bands that weren’t 'engaging their audiences at all' and wanted to 'offer people more'. “I got so sick of watching bands with just four people standing on stage and I felt like there was this whole pool of wonder that they wasn't being drawn from in live shows." She adds, "Who are we to stand on stage and just play and expect everyone to nod along and then go home? I want to engage with the audience and have them engage with me." A room filled with expectant punters can be hard to judge I propose, so couldn't it be equally risky offering too many distractions from the music? "Well I say kudos to people like Jason Webley (from Evelyn Evelyn) who can just go out on stage with an accordion and be utterly captivating. There's something authentic about that you can't deny. Then on the other side there's things like Muse, whose visual side to their show is kind of over-saturating and a bit too clinical I think. That kind of display doesn’t leave your audience wanting more. We try and prod our audience a little bit at a time instead of battering them over the head with stimulus." Mojo adds, "I mean our show is visual yeah, but not in a way that creates a wall between you and the audience." 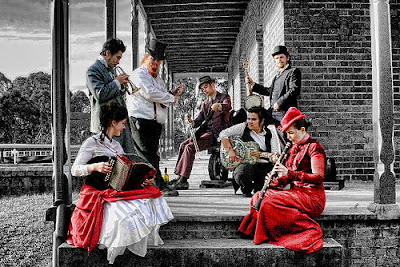 The Snakeoil Merchants may be putting their Jitterbug Club show to bed, but Mojo is in her own words, 'bursting with new ideas for a show'. The end of a successful run like the 1930s New York-themed Jitterbug Club, is a bittersweet affair, Mojo admits, but as the prime designer she is obviously keen to make some new wow. "Ending these shows is just so sad in a way because of the relationships I've built up with the other performers, but at the same time, I'm so excited about the possibilities of doing something new. I've been working with a collective called the Hoodoo Emporium to help see my next fantasy  through to fruition. One of the shows is a Wild West type performance called The Devil Rides A Rocking Horse, with can-can dancers and all of that kind of thing." Mojo laughs, "I could talk for hours about what I want to do next, but really what it boils down to is working on the Jitterbug Club shows has made me realise my twisted fantasy's can actually become real working within the realm of vaudeville."
lEIGh5
Posted by lEIGh5 at 7:18 PM