Singer, writer and multi-instrumentalist Dean Manning maintains the ultimate bohemian lifestyle. Dividing his time between music, travel and fine art, the former Leonardo's Bride guitarist - who penned the 1998 ARIA song of the year, Even When I'm Sleeping - has exhibited his paintings several times, many of which are impressionist postcards of his tireless travels, and more recently has reunited all five members of Holidays On Ice – a kind of East coast super-group – for album number two and a tour. The writing on Pillage Before Plunder, much like Dean's art, is a document of a restless troubadour. Talking from his Sydney home (no doubt a place he holidays in), Dean considers his every response and wastes no words as he shares with me what feels like fragments of a great untold story.


"Traveling is a buzz, obviously" Dean begins; "I like the rollercoaster lifestyle, because I get bored rather easily and I need to be out of my comfort zone to work. I also like to have a purpose and so I have sort of fallen into this life where I can be purposeful and satisfied." Living the romantic life as an artist and musician, Dean is rarely required to compromise his great loves. "I don't compromise my personal relationships in favour of work, there are a lot of impracticalities about that, but I do think it's important to keep pushing myself whether it be in painting or writing." Dean's artwork often features a self portrait within - if not the main feature - prompting me to wonder, is self-examination a motivation to paint. "I think that's a subconscious thing really, and I have tried painting friends many times, but always at the risk of horribly offending them." He laughs, "I have had some strange reactions to my portraits (of friends) they say things like, 'is that `really how you see me?' so it's probably for the best I stick to self portraits. I mean I think it's really cool how Paul Kelly can write songs from the perspective of a woman, but I'm quite lazy in the way I really only give my own personal take on things." One of the most notable things about Holidays On Ice's album is the breadth of styles on offer. Dean puts this down to time spent writing in different countries on his own, and sporadically with his band mates as the opportunity arose.

"Some of the songs were actually recorded many times in different ways to see what genre they would best work in. The heaviest track on the album Ribbon Round A Bomb, started out as an acoustic piece and ended up with layered electric guitar and a duel vocal between myself and Angie (Hart). It's funny how some of the criticisms about the album have been people saying 'I really love the heavy tracks, (like Ribbon…) but what's with all those other folky ones' or visa-versa but really the heavier tracks could have ended up softer, depending on what we thought worked when we got in the studio." Dean tells me French avant garde singer Serge Gainsbourg was a reference due to his constant switching in genres. "Eat A Peach on the album is a little tribute to Serge. He put a lot of noses out of joint, that guy for having the audacity to not stick to playing one type of music. He'd put out a reggae album and then a blues album and it seemed to piss off a lot of his fans because I guess they wanted him to repeat whatever it was they liked him for in the first place. I like that he was against the idea of repeating himself, and that he didn't give a fuck what anyone thought of him."

As we talk of idols, Dean reveals a surprising affection for 1930s Hawaiian tattoo artist, Sailor Jerry who patented many of the identifiable sea-farers marks (anchors, mermaids etc..) I wonder if Dean is bit of a salty-dog at heart. "I never really acknowledged an interest in the sea and sailors until it was pointed out to me by a guy who wrote a bio for our website." He laughs. "Perhaps I shouldn't have included so many sailing boats (in the album art) and sailing references in the songs. (No Flowers Grow On A Sailors Grave) There's no getting away from it now!" 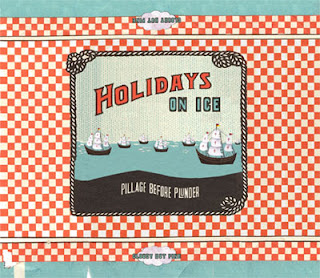