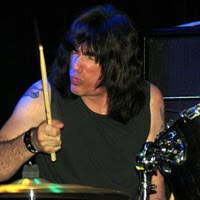 venue: The Corner Hotel
Bands that carry on after the singer has died - take a bow Queen, INXS, Alice In Chains - is one thing, but drummers that carry on after everyone else in the band has died is really taking the piss. The nostalgia trip of touring so soon after the rest of the Ramones passed on is just a step in the staircase of Marky's life as it stands at the moment. He is busy compiling old footage of The Ramones' hayday (1978-1983) for DVD releases, writing a book about his band and others of the New York scene in the late 70s and launching a clothing range consisting of leather jackets, T-shirts and jeans - which was basically The Ramones' uniform. To go on tour with a new band playing Ramones songs perhaps seems a natural extension of this nostalgia. His band, Blitzkrieg, is lead by ex-Misfits singer Michale Graves (well, only from the later line-up of Misfits, long after Danzig had buggered off), former AntiProduct guitarist Alex Kane, and bassist Clare P. Product (pilfered from a Ramones cover band called Ramonas). Clare and Graves look every bit the image of modern punk fans/band members. Stripey red-and-black arm band thing. Check. Half-shaved head. Check. Piercings. Check. Guitarist Kane, by contrast, looks like he should be riffing it up with Cheap Trick or a Def Leppard cover band (it's a weird mix already), but then throw in Marky Ramone, larger-than-life on an elevated drum stand, still with his 70s bowl mop haircut and a massive set of drum sticks too. It looks as if the revolving stage at a rock music festival got stuck halfway between Murderdolls, Quiet Riot and The Ramones all playing at once. 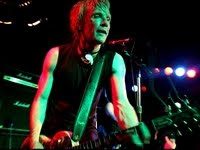 Tonight is The Ramones greatest hits show for everyone who missed Dee Dee, Johnny and Joey playing The Ramones' greatest hits. Having one Ramone on stage makes it kind of authentic. Kind of, except that it sounds more like Rancid doing a set of Ramones songs instead. Most noticeably missing is Joey's deadpan singing, now replaced with Graves' screamo rendering. Tonight at the Corner Hotel we get the generally mid-tempo songs lost a lot of their swing and melody as they were unceremoniously played out twice the speed of the originals with no stopping between. The Ramones were really more of a garage rock band than a punk band (I'm sorry but punks don't have bowl haircuts, kids), so playing the songs in the style of another band entirely makes it seem a little cheap. Bassist Clare is sporting a freshly ripped Ramones T-shirt (available at the merch stall for a reasonable price), and I realise then the whole thing smells like a bit of a cash-in on the legacy routine. She was even in a Ramones cover band: talk about pop (punk?) eating itself. Cash-in or not, the thrill Blitzkrieg are giving their audience is palpable. There's a frantic sea of mohawks jumping up and down determined to get something real out of the show. There is one very large mohawkend punk in particular that's hard to ignore as he thrashes his body around in approval of every song - resulting in a pile of bodies being shoved two-and-fro - until, like a mini tornado, he clears a decent space all for himself to freakout in. 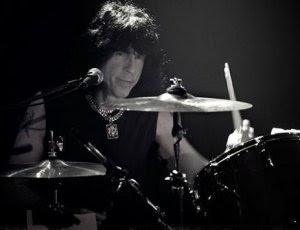 The age differences represented are unsurprisingly broad; there's even a few dads still in possession of the rage. (They did however fill out a complaint form afterward about the volume and all that unnecessary spitting. Probably). Whatever favourite songs the hardcores came to hear, they almost certainly got, from the band's first ever hit, I Wanna Be Sedated, to Teenage Lobotomy and Shock Treatment. Marky looks focused and not-at-all his age as he goes through the motions playing songs he must know backwards. The whole set is now just a medley, as Blitzkrieg continue to belt through the hits as fast as possible. They wedge Judy Is A Punk, Rock N' Roll Highschool and She's The One all into the space of five minutes. Fan favourites Blitzkrieg Bop and Chinese Rocks were arguably the best of the night, agian not terribly faithful renditions though. A messy thrash through the excellent Pet Cemetary is forgivable but not so is the cover of Creedence's Have You Ever Seen The Rain. Haven't we suffered enough?, I thought. Apparently not, because then comes the possibly ironic inclusion of Louis Armstrong's What A Wonderful World. Not satisfied with just slaughtering Ramones songs, Blitzkrieg have moved on to other peoples'. The encore is akin to watching a wilderbeast explode in slow motion - you can't wait for the end. 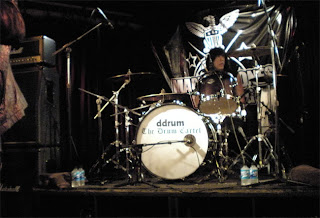 To Marky it probably seemed a simple idea - people still love The Ramones, get a new band happening and play the songs people love. Easy. His heart was altogether in the right place. Somehow that idea translated into four people on stage messing about with some old songs. Maybe some passion wouldn't have gone astray for the fans’ sake, who were in the end, the stars of this show.