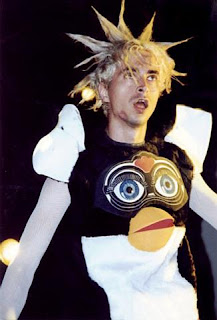 It's a strange start to the interview with this highly animated character, and so I decide to get a little deep. I ask if he worries with a name like Jimmy Urine that people might take him too seriously. "I haven't ever thought about it! (laughs), I mean we just like to do the whole wacky names bit as a freedom thing, just to make it fun for ourselves." In 2008, this US mock-rocker four-piece released their fourth album If.., I want to know, what's the rest of that question. For a band with song titles like Dicks Are My Friends, it sounds a little philosophical. "If, is open to interpretation that's what the deal is there. You have to have your own If."

It's too early so I decide to change tact and bring up the band's new song, a bizarre homage to John Lennon’s assassin, Mark David Chapman ("...Hey, when he world's overrun with too many bands/Who's it time for?...") and wonder if Yoko Ono has started making angry phone calls... "I don't think anybody would take seriously enough what I say to give it a second thought. I was talking about how basically there are bands still going on for the wrong reasons, and bands that reform because suddenly they have this whole young fan base who only know them through the internet. The net is really to blame, because nothing (music) has a chance to age and gradually lose its relevance and get replaced by something else and ultimately become a thing of nostalgia. Instead you’re gonna end up with these old guys sitting in the corner, you know eating their own shit going ‘oh yeah, Jay-Z – love that jam!’"

Nostalgia is in short supply with Urine, he takes aim at a few more sacred cows including Jimmy Page, (I Hate Jimmy Page) and leaves the subtleties to the more inhibited. Surprisingly though Jimmy isn’t even that passionate about music. “It’s just easy, you know. I can sing about this shit and act like a fucking idiot in front of a crowd and people love it. I’m much more into movies than music really.” Sample lyric from the ballad Two Hookers and an Eight Ball:
“…Two hookers and an eight ball
Can you believe that I write this shit
Two hookers and an eight ball
Stupid people thinkin' I am cool…”
“You know when I wrote that song," Jimmy interjects "it was more against the people who try too hard to shock for attention, or just wanna get their lovey-dovey song on the radio. There’s no real integrity in any of that stuff, and I was just having my say for what it’s worth.” 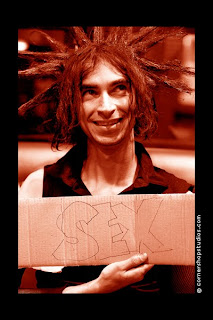 Perhaps the ‘shock for bucks’ thing is very outdated? Marilyn Manson and Slipknot always looked a little more silly than scary to me. I suggest to Jimmy that Victorian-era dresses and powdered wigs would be, these days more shocking in a rock concert than razor blades and platform boots. “Yeah I could definitely get into that. Maybe we should do a side project, like Corey from Slipknot and just have a serious rock band on the side with the wigs and stuff, and do the dumb-ass thing just to get paid!” (laughs)

Mindless Self Indulgence have managed to remain fairly independent, by only signing one album deals whenever they are due to release a new LP. I wonder if this has continued to be a positive way to operate. “Yeah well with regular record contracts you have some guy saying ‘you’re gonna give us this kind of record by this date…’ and we decided that with one-off contracts we could work at our own pace and make the music we want to make. At the end of the day people have to make money in this game and we don’t kid ourselves or see the record industry as some evil monster, it’s just business and I understand that labels need to make money to survive. We still have to do the work at any rate.” It’s clear there’s no malice in Jimmy’s tongue-in-cheek approach to the business and his music. His act is essentially a reaction to the overly macho Limp Bizkit/Korn/Papa Roach drones. With that in mind, I can’t help asking Jimmy, if Mark Chapman is released from prison tomorrow – who’s on the hit list? “I think I’d like to just see a massive apocalyptic wipe-out and then see who’s left standing. Survival of the fittest can’t be argued with.”