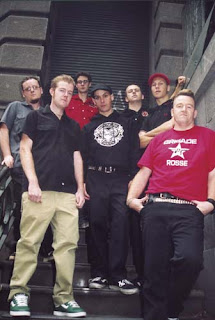 The 15 year anniversary of Melbourne’s premier Ska outfit, Area 7 has rolled around and the boys are planning on partying like teenagers to celebrate. In the mid ‘90s they spearheaded an unlikely revival of skanking tunes during a time of zero interest in the genre. Thankfully, Australia caught the Ska bug and Area 7 helped kick open the door for acts like The Living End and The Resignators. With the band’s live reunion imminent, guitarist Charles “Chucky T” Thompson on this sunny Australia day afternoon talks me through the heyday of Melbourne’s pub circuit as a young music fan and soon-to-be live draw card in his own right.

“When I was 16, 17 you’d go up Brunswick Street to The Royal Darby and Punters Club then you’d nip down to the Tote and it was only a couple of bucks to get in or sometimes it was even free and you’d get to see just heaps and heaps of bands in weekend.” He begins. “There’s much less of a scene now though, and I feel bad for young bands who are struggling to get their first gig because of the competition from more established acts. I think the kind of working class element is really gone from it which is a shame.” Much adored pubs like The Tote closing down has, according to Charles, created a big hole in the live scene; “I have so many great memories of going there and seeing bands like The Meanies and The Mavis’s on the same bill and you just don’t get that sort of thing happening anymore. The scene is kind of dying off.”
Discussing the thrill of going to a mixed bill of bands in one venue brings up what Charles feels is his bands legacy – one of inclusiveness among punters. “One of things we always wanted to do in Area 7, keep it accessible and be a kind of ‘everybody’ band. The thing that was great in the early days of the Ska and Punk scene was it was accepting. Whatever you were wearing could become your uniform and they weren’t ruled by money or elitism, so we all really loved that aspect of the Ska scene.” Area 7 as a ska band don’t fit the genre entirely as Charles points out, they’ve always incorporated a little rockabilly into their sound as well; “We’re basically a pub rock band who love the ska, punk and rockabilly sounds and further more agree with what those genres really stood for.”
The sense of fun in Area 7’s music is undeniable also. Beginning as a Madness tribute band, perhaps lent an easy up-beat optimism  for them to develop as an originals band, I suggest. "Well we were basically recruited in to the Madness tribute band (known as Mad Not Madness) through knowing the singer and various musicians around the scene, but it was never a conscious thing of ‘let’s be a Madness tribute band’ it was more that Area 7 evolved out of that because a couple of us wanted to do our own thing.” Charles was instrumental in kicking off Area 7 as an original band through his songwriting ability and an urge to get away from the tribute formula. “It’s funny because at the time we were doing the whole Madness thing it seemed like an eternity since they had split up, but in hindsight they’d only been away for a few short years, and then they got back together soon after Area 7 started and are now celebrating their 30th anniversary and we’re on our 15th, so we definitely made the right decision to go onto originals or otherwise we would have been made fairly redundant, I think.” He laughs.

With success a long way off still, sticking to Area 7’s musical roots according to Charles was not exactly setting them up for guaranteed popularity; “My recollection of it is, when we started Area 7, ska was still pretty much a dirty word. We were given support by a couple of venues like the Tote and Punters Club, but no sort of mainstream venue would book us, but now it’s gained such a massive following and there are many great ska acts finally getting some recognition.” Ska fans usually come complete with some indicator of their devotion to the lifestyle beyond just owning the music. So how deep does Area 7’s ska/rockabilly obsession run? “I’m quite into the style and the fashions but I’m not a collector of old Hotrods or anything like that” Thompson laughs, “Although our singer Steveo’s right into Chevy’s and Dave Jackson (Keyboardist) is into the whole 1950’s comic tattoo art associated with the rockabilly scene, so to varying degrees we are all into the broader Ska thing outside of simply playing the music.”


The Chevies and Hotrods (or at least Tarana’s and Commodores) of suburban Australia were, at the start of the last decade, incomplete without a certain Area 7 custom built anthem cranking out of their speakers. So how proud is Charles of Nobody Likes A Bogan? “We were a little surprised at how well that song did, but in short we’re as proud of that as any of our others. It was however a good way of reminding listeners that we don’t take ourselves too seriously but it was by no means an indicator of what that whole album was like.” 2002’s Bogan still stands as Area 7’s only cross-over hit, spending six weeks on the ARIA charts and even gaining radio play from Triple M. “When it started getting popular, I did worry a bit that people might get a bit offended or not really get what that song was about, but what actually happened was people I think saw the funny side and realised we weren’t just taking the piss or anything.” It was in fact an earlier single that caused Area 7 to cop a bit of flack - the irreverent Himbo. “I never really understood that at all, because there were a couple of lines in there describing metrosexuals and spending too much time in the mirror, but apparently that was crossing the line. It’s like you can take the piss out of some things but then you can’t do so with others, and when you’re in a band you really can’t over think that sort of thing.” 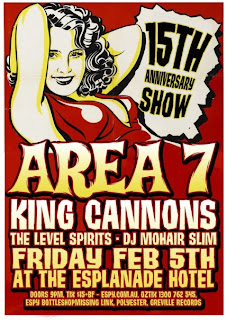 Although they’re celebrating 15 years together, Area 7 could be mistaken for a band-no-more with so little notable activity in recent years. Charles explains their absence and what brought about the group’s hiatus. “You know, I got married in 1998 and my poor dear wife had to have our honeymoon on tour with us and The Living End, who were actually our wedding band as well” He laughs, “So looking back I realise she had actually given up quite a bit to let the band do what we needed to do, and now I have three kids so unless the band could’ve worked out some kind of schedule such as work seven months then have a break for the rest of the year so we could be parents and husbands as well, I couldn’t see away around it and so we agreed to take a break.” Area 7’s label Zomba also made continuing on a difficulty by simply closing their Australian branch, leaving many bands out on their own. “Once we no longer had a label pushing our album and organising tours, we just went our own way and decided that we’d tour if we were asked and record any future music and release it independently – which we did in 2005 with the album Torn Apart.” Charles finishes by adding; “We’re only here to enjoy making music, and so when the label thing happened we just went, yeah okay fine, we’ll just do it our way then. Since that time we’ve played with Reel Big Fish and did the tour of East Timor for the UN and so it’s hardly like we’ve missed out on much not having that label support.”