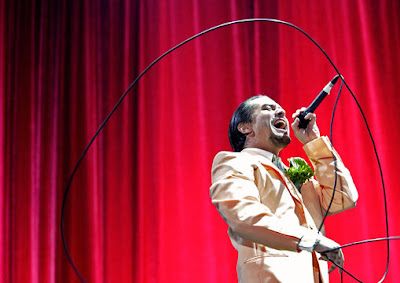 Something very unusual was happening at Festival Hall prior to Faith No More’s second night as headliners in their Soundwave sideshows. Maybe the sight of hoards of neon blazered security staff pouring across the road to the venue has caused an outbreak of calm and chilled behaviour among the many gathered fans. The one night music fans don’t want to be singled out as trouble makers or likely to create a disturbance is upon us, and you can just feel the cool oozing out of the faithfully assembled. Anticipation for this concert is pointless to mention, this is the biggest cult band in the world.

Arriving half way through warm-up comic Neil Hamburger’s set, it’s obvious the guy was enjoying taunting the died-in-the-war Faith No More fans crazy enough to stand at the front. One Red Hot Chili Peppers joke follows another in an unbroken torrent of single themed gags; “Why did the Red Hot Chili Peppers go under the bridge?” shouts of abuse and thrown items; “because there was a pile of shit there and they hadn’t injected themselves with it before.” He continues, pretending to wrap up his act, only to throw in more jokes. It was funny in the same way watching somebody poke a fork into a power point is. Meanwhile we, the fans down the back in the general standing area are faced with stage-a obscure-a syndrome from the countless heads and hands. Yet later seeing the fans who braved the mosh resembling very ripe bananas after a cattle stampede, it’s a pretty good compromise. 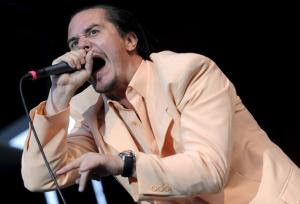 After a wisely short intermission, Faith No More fill out a stage dressed in light peach matching dinner suits and for the next minute everything goes blank as the crowd roar, leap and punch the air in excitement. The cacophony is quickly replaced with the whimsical sound of a melodica calmly sounding out the tune to Midnight Cowboy - a chilled instrumental from the Angel Dust album. Faith No More’s refusal to be cast as ‘just a rock band’ is evidenced all through their show, however seeing them rip through The Real Thing and Land Of Sunshine like the proper metal band they sometimes are, is an unmatched thrill. The crowd tonight are on edge during every song, desperate to drink in every glorious moment of music. The heat generated by the capacity crowd was becoming overwhelming and before long, a scuffle or two broke out, only to stop almost immediately as the thought of missing any of Faith No More’s set apparently kicked in. Sound wise, Faith No More suffer the usual problems faced by bands at this venue – total muddiness – although Patton’s voice is perfectly designed to cut through the dirge. On Ashes To Ashes he soars over the heavy synths and drums showing off that signature range on the song’s explosive chorus without effort.

The second of Faith No More’s sideshows at Festival Hall is becoming more of a greatest hits show than the previous night where they were tacked on to the bill ‘last minute style’ with AFI and Gallows. Basically tonight it’s all of the singles – including the covers of Easy and I Started A Joke. After the latter song - made famous originally by the Bee Gees - Patton drawls into his mic; “You love your Aus-tral-ian songs huh, Melbourne?” He pauses as everybody cheers, “You’ll want some Jimmy Barnes next I suppose?” Thankfully, instead of a surprise Barnsey cover, the sweet sound of A Small Victory follows, earning the greatest response so far. It’s no small feat either, when classic songs Epic and Gentle Art Of Making Enemies had people practically ripping the floor boards up with their teeth in excitement. It’s well known that Patton doesn’t mind making a bit of time to meet his fans, but as he hurls himself into the frantic crowd I wonder if he had any regrets. After the surge towards him he eventually emerges over the heads of the front row while a fan tries desperately to relieve him of his shoes. The man handling from where I’m standing was brutal and crazed, time to take a break it seems. The crew retrieve Mike from the pit and the band exit the stage, shoes intact.

The encore was always going to be interesting; they have so far played everything that could make up a typical ‘go out with a bang’ type encore. Midlife Crisis, Ricochet, Caffeine and Surprise! You’re Dead! have all been played, so the jury’s out. Perhaps sensing the need to cool things down a bit, Faith No More decide to go a little go new wave on a cover of Siouxsie & The Banshees’ Switch. The long feedback heavy version seems like finishing, when suddenly it morphs in to Stripsearch – its synthesised strings and tense, slow ticking beat giving the Festival Hall crowd a chance to cool down a little. Patton - always the charmer – finishes this momentous show in his creepy uncle speaking voice, “Melbourne, thank you for your attendance, we’ll see you again some time.”
lEIGh5 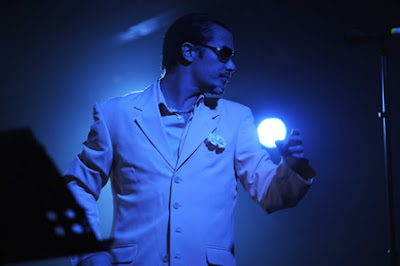