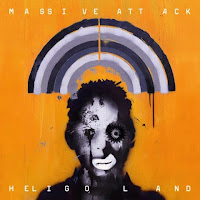 Massive Attack it has to be said take their sweet time in serving up any product at all, so when an album does arrive it's something of an event. The band so far in their 20 year career have never fully escaped the shadow cast by debut album Blue Lines and are it seems destined to have all subsequent works compared to it. The thing is, all Massive Attack albums are largely blueprint in formula and why shouldn't they be? The recipe's good and nearly always works, and with only five albums in their cannon, you could hardly say they're flogging a tired old nag.
Despite long periods of inactivity, there's still something of an old friend factor to Massive Attack so the time spent listening to their new set was  to be a fairly comfortable experience, surely?. There would be some familiar tales, told by voices reminding me of good times with perhaps some new learned wisdom thrown in...? Well, no. In fact Heligoland actually comes across more like a total stranger. I find myself having to tease information out of the music rather than the expected easy flow of long-time acquaintances. On the upside to this, repeated listens show Heliogoland to be quite a strong contender for slightly sinister new best mate. A great companion to stand with in the 7-11 at 4am, bleary eyed and pretending you're in an American indie film about to pull out a shotgun and say something deadly cool.

So it's a little unfamiliar, but like all Massive Attack albums, there needs to be a bit of environment set-up to really appreciate it. Candles... well if that's your thing, but low light for sure and maybe a jostick and something in the room that hums, such as a fan. The first thing you'll notice about Heliogoland is by half way through the ten tracks, the mood and tempo are set at lucid and are not likely to change. And change they do not, but like thoughts during lucid sleep, so much is revealed if you just allow it to happen. Opening track Pray For Rain begins by layering live drumming with morose strings which eventually turn into popping electronic blips sung over with an increasingly urgent robotic chant until finally a flourish of gentle falsetto 'aaahhh's' come in as the music mimics a breaking drought. This song hails the welcome return of Grant "Daddy G" Marshall who hasn't sung on a Massive album since 1998's Mezzanine. The vocal duties on the rest of the album include the usual long list of guests, Tricky's ex-vocalist Martina Topley-Bird appears on Babel and Psyche - and naturally, it's a perfect fit. Her lazily half sung parts automatically trigger thoughts of Tricky's earlier work, which was always a heavier extension of Massive Attack's.

Regular guest Horace Andy also returns here sounding better than ever on Girl I Love You, backed with a tremendous live horn section. The single, Splitting The Atom, is the most immediate track here, boasting ice cold strings and a hip hop beat suggesting perhaps a Gorillaz influence resulting from Damon Albarn's contribution to the track. However, it's the combined effort of Albarn, Grant Marshall, Robert Delnaja and Elbow's Guy Garvey on Flat Of The Blade that stands out the most. Garvey sings ominously "...I'm not good in a crowd/I've got skills I can't speak of/things that'll chase me to the grave..." over a rising string melody and occasional horn blasts. All the best elements of the album come together on this track, and if you like 'em dark and brooding, it's guaranteed to please. That said, there is a warmth to Heliogoland that was missing from 2003 album 100th Window. The use of live instruments or rather the choice to not bury the live instruments in the mix is a huge benefit to the album overall. There's a good variety of vocalists and collaborators on offer, each given room to breathe and make their individual stamp on the songs which in the past had always served Massive Attack well. Core founding member Robert "3D" Delnaja is still lurking in the corridor, chain smoking and rasping away, only this time he's paused at the door and allowed his guest ensemble to shoulder a good deal of the work. Heligoland ultimately is a grower of an album, if not just for it's detached mood then for it's striking contrast to most popular music currently on offer. Grab it and let it grow, you won't be disappointed.