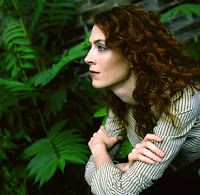 What do you do when you're the bassist in one of the biggest '90s rock bands and suddenly find yourself out of contract and wounded from an under achieving solo album? In the case of Hole's Melissa Auf Der Maur, a high concept film/album/comic project was just the thing needed to move forward. The risk factor must also have seemed high when halfway through recording Out Of Our Minds, Auf`Der Maur began her own publishing company - MAdM - to see the project through after being dropped by her label. As to be expected, the engaging singer's spare time is a rare and precious thing these days.
"I'm sorry this interview has to be so tight, I mean the clock has been killing me lately." She begins, "Every second of my time is on a schedule and this is just so weird for me as someone who's never had to work to the clock before taking on this project." Melissa explains at speed, talking through the previously unheard of commitments facing her day to day since the release of Out Of Our Minds. "I feel like I might be making up for lost time because there was like this decade where I was just coasting but now I'm in redefinition mode. I remember realising one day I didn't want to just be in this sort of limbo anymore." 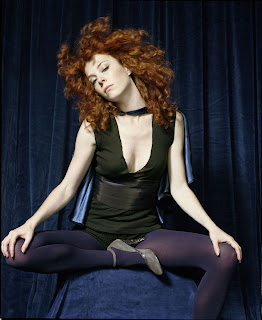 Her active life as a musician began once the Canadian native was asked to replace Hole bassist Kristen Pfaff following her suicide in 1994. Then after Hole burnt out in the early 2000's, Auf Der Maur toured briefly with the Smashing Pumpkins, once again as a replacement after bassist D'Arcy Wretzki refused to be involved with the 'new model' Pumpkins. Melissa's first solo album came out in 2005, and that same year she began work on a concept that would consume the next four years of her life. "Thank god for my blog, because that became my life force." She laughs, "I was at least able to keep people abreast of the situation all the while hoping my frustration wouldn't get the best of me while I saw this thing through."

The elaborate Out Of Our Minds project's end was never clearly in sight, Melissa describes. "I never really lost patience but at the same time I was there going 'another year has gone by and I still don't have anything to show to the outside world yet'." She says of discovering her creative ambition was at odds with the business. "The weird thing in my case is I was always being creative and made no time at all for practicality and now I've had to learn to channel my creativity and live in dream land and music land when I need to and also how to run my own label and finance my production company embracing all the technologies from online to actual manufacturing of the things. For me the challenge has been how do I learn to be practical rather than how do I find time to be creative." 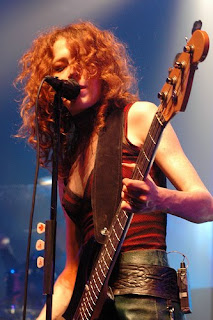 Melissa claims her first solo album suffered from her label's lack of interest and subsequently built up her own label to see through her current release. "My relationship with EMI/Capitol dissolved half way through making Out Of Our Minds, and I thought well it's just reckless to allow somebody else to hold the key to how I release my work and what I put out. That's when the real decision came - and all the hard work started - to do it myself and start the label."

The album and film in question tells the story of three women from different times in history meeting in a forest where the trees bleed and Vikings roam. Included are many references to mythologies and folklore with an overriding factor of death and regeneration, topped with Melissa's interest in historical fact finding. "Mythology has always intrigued me and so the Vikings are in my movie, because their mythology is so strong but it's hard to say how much of it is based in fact. They represent to me people whose actual lives have kind of been replaced with kind half-fictional story telling which is why in the movie there's this search for the Viking's heart. It's like a search for the truth and humanity behind the myth."

The music side of Out Of Our Minds ultimately fed the idea for the short film. The origin, of which Melissa explains, came about after a life changing personal loss. "The lightning bolt of what direction to go in came from the album's title track, but ultimately the death of my father planted the seed for the broader idea. Had he not died, I wouldn't have pushed myself so much to see this project through." The work on Out Of Our Minds is a wealth of creativity, boasting well defined ideas working together with no slack parts. In her film the central story is triggered by a car crash, which makes for a good analogy if you look at Melissa's surviving credibility and artistry following the Courtney Love and Billy Corgan ego trips she was previously
passenger to. 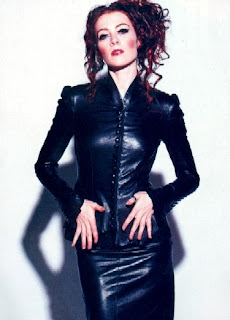 Although admitting to having no perspective on the project right now – that'll take time - she carefully considers her recent achievements; "I don't know what I'm more proud of," Auf Der Maur sighs, "the experimenting and the collaborative side of it or that someone like me can be young productive businesswoman." She adds self-effacingly, "I'm proud of the fact that I was able to rise to the challenge and also return to my roots as a visual artist and be able to marry that to the music. That took a long time to create, I mean the film alone took almost a year of my life and the album was on and off for a couple of years, so I took a lot on in regards to the quality of work I committed to myself to make."

On the path to completing Out Of Our Minds, Melissa has been joined by a drool-inducing production and collaborative crew. Names such as Alan Moulder, Chris Goss, Mike Frazer and Glenn Danzig turn up on the credits. "I was traveling alone with my hard drive containing all my song ideas for a couple of years; I'm a bit of a lone wolf you see, and I met up with these guys on my travels, who were all friends to begin with except for Glenn Danzig, and because I was writing the album as I was going, it was just easier to take what I had to them and work on it wherever I happened to be." Glenn Danzig's credit is as vocalist on the track Father's Grave. Melissa's only choice, as she explains, for duet partner; "Because the song needed to be told from the perspective of the dead father in the story to his daughter, it just had to be Glenn as he was like my musical parent as a teenager." She reveals, "He's like my last frontier actually. Glenn and Morrissey were the kings of my musical world when I was 15 or 16, so I had to really build up to asking him to enter my world." She laughs, "It was also the first time I had written a song for somebody else to sing and I felt like I owed him so much, so I just closed my eyes and thought 'what would Glenn do?' and it just worked out like magic."

While Australia is only now about to see a local release for the album, talk of touring the accompanying film is still only that. The third installment of the project - the comic book edition - is imminent in North America and Canada, and although eager, Melissa would prefer to contemplate an Australian tour once all of the mediums are available here. "Doing the Australian summer festivals with Hole were seriously my favourite tours of all." She beams, "I'm thinking of the possibility of a tour on the back of independent cinema screenings of Out Of Our Minds, but nothing is certain yet." She adds optimistically, "But hey, I'm feeling a lot more support this time around so I'm really hoping that's gonna happen." 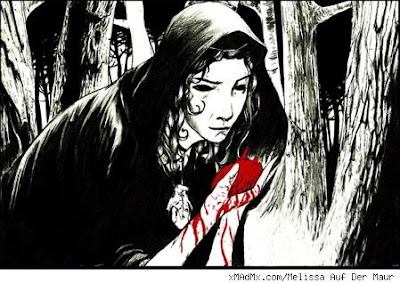