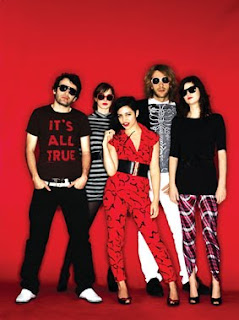 SERIOUS HORSIN' AROUND
Anybody who warmed to New Young Pony Club’s debut single Ice-cream with its burst of neon joyfulness along with debut album, Fantastic Playroom, may find themselves having to do a little re-adjusting to the band’s newest set. Producer/guitarist Andy Spence takes some time to discuss his band’s darker, more mature second album, The Optimist beginning with its perhaps misleading title. “The Optimist, well that was just how we felt throughout the making of the album.” He states, “We were at least optimistic that we were making great music, and making something that was real, so naturally we felt good about it.”

The ‘we’ Andy refers to is himself and vocalist Tahita Bulmer - who make up the creative core of the band - completing the line-up is Lou Hayter (keyboards) and Sarah Jones (drums). The UK based NYPC developed an almost hit-guaranteed album with the poppy Fantastic Playroom in 2007 after being snagged by Australian label Modular prior to any local interest. A surprising start to things, as Andy remembers. “It was just that we had been all over Europe and to the US and never even stepped foot in Australia, so when Modular wanted to sign us on the strength of our independent single (Ice Cream) we were pretty shocked.” He continues; “Now we have had some of our biggest support from there and everything really sort of opened up for us after Australia, yeah.”
The band, after dropping an album’s worth of music, gradually developed a darker, more involving sound for album number two. The question is what dynamic within the band changed to affect the music so. “Well we don’t really disagree on very much when it comes to where we want to take our music, well at least we don’t argue amongst ourselves and get all precious about it. We usually know when it’s good and when it’s not working, quite simply and any changes made during the making of this album have come from us basically agreeing we needed to move things on.” 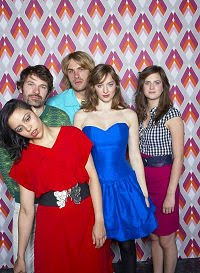 Spence is undoubtedly in the driver’s seat for NYPC, having produced all of the band’s music up to this point. He discusses his role. “Actually a lot more has been made of it this time around, but we actually funded everything, and I produced the first album as well.” He states, “To be honest it’s the only way we can work – the way we create our music is to produce it as we go along as opposed to taking the demo versions into a studio and getting other people in to finish it you know.” Despite the self-sufficiency, Andy explains, having outside influences is a given and something the band aren’t opposed to seeking out. “One thing we do rely on to make sure we’re keeping on track is our management and friends having an impartial opinion to help guide what we do.” He continues, “We actually invited in our old A&R guy from Modular in to listen to tracks, and he didn’t like any of it but there was actually some bad blood between us and so he was a bit narky but we wanted to see how much his opinion of our music would be influenced by personal differences” He laughs, “It was good though because there’s no point just having everyone tell you it’s great and having no second opinion at all. We needed to give ourselves a harder test this time around I think.”

On the point of the new album’s greatest strengths, Andy is confident they have prepared a set fit for all moods; “I think a lot of people are surprised at far we’ve gone in two albums, I mean how much our sound has changed and for me that’s a good thing, but we’ve also been criticised by people saying it’s not up and it’s not down it’s neither one thing or the other but I think that is what the album’s greatest strength is. I’ve always loved albums that have the really extreme up, positive songs and the equal darker moments as well such as David Bowie’s Low and Prince’s Sign O’ The Times.”

I tell Andy that Tahita Bulmer’s vocals on The Optimist are remarkable for their likeness to almighty punk goddess Siouxsie Sioux’s. He divulges a-not-at-all-surprising shared love for the singer. “I might be giving too much away here but we actually went to see her in concert half way through the recording. I mean we’ve always admired her but it was just a great reminder seeing her perform.” Spence muses, “You could name on one hand the amount of people like Siouxsie – strong female singer, still in full possession of the punk ethic, and doesn’t resort to selling sex as part of what she does.” 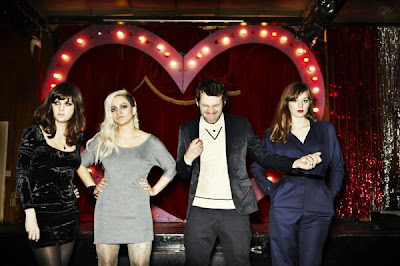 Andy Spence; optimist in conversation and by admission through his current album’s title. So what, if the future is bright, is on New Young Pony Club’s gotta-do list?, “I’d like to play bigger venues, connect with more people, maybe win a Brit award or a Grammy.” He laughs, “I’ll just throw those in for the sake of an answer but basically I’m happy with what we’ve achieved so far and right now, it just feels as good as it can get.”
lEIGh5
Posted by lEIGh5 at 10:10 PM