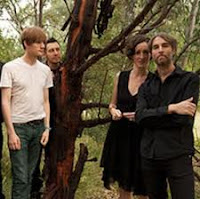 The outpouring of sympathy usually reserved for women who lose a new born was never to be offered Lindy Chamberlain. The mother at the centre of Australia's most enduring lost child story faced a rarely seen level scrutiny and criticism following the 1980 death of baby Azaria. Her story of wild dogs in the harsh landscape against one tiny infant seemed almost too horrific to be true, and it was precisely that seed of doubt Lindy's detractors would exploit for years to come. Now, as the news of Chamberlain's innocence is finally to be recorded as the official outcome, focus on the latest Paradise Motel album - which conceptually deals with the event - is sure to be high. Titled Australian Ghost Story, it marks the return, both musically and geographically, of the celebrated masters of song-noir.
The combined efforts of sloppy police investigation and the media of the day managed to turn a wild dingo hunt into a slasher-mum thriller, in the process awakening Australian's disinterest in the facts over a possible gory tale. The Paradise Motel come in to the picture 30 years after the event as campfire-story tellers, backed with a chilling soundtrack plump full of suspense. However their exploration of this familiar tale avoids what many Australians were divided on – where to point the finger of blame. The Paradise Motel's founder and songwriter Charles Bickford walks me through his band's unique take on one nightmarish event in our history that never really seemed to go away. "The reason I wanted to make this record is to address the question of what's important to us as Australians and why do we react to things the way we do." He begins. "The second reason is that I've always been interested in examining individuals' lives when they're confronted with extreme experiences. When I put all these ideas together I was very conscious of letting the decision-making process stay in the hands of the judge and jury and avoid accusations of any kind." 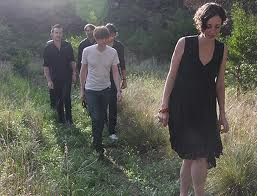 The band, after a long hiatus spent living in England, has cruised back into the local landscape, asserting themselves firmly with a set of powerful impressions on Australian Ghost Story. Charles recalls his welcome reconnection to music. "When I came back to Australia a couple of years ago, I found something in me that had been slumbering for so long was suddenly awake again. Then it was just a question of talking to the others in the band and I think we all agreed there was some unfinished business." Yet recording together again after an eleven year gap, meant finding the right environment to fully capture The Paradise Motel's renewed fervour. Charles explains. "The idea for the record and the period in which we recorded it was such a short space of time, so it was really important for us to get the mood right. We chose a place in Warburton (rural Victoria) - which was just a barn really - because it was a very beautiful, spooky and still place which we thought suited the material."
Although the album was Charles's pet, it also proved to have a healthy uniting factor for the group. He continues. "Paradise Motel is such a collaborative thing, I really just had this loose idea about a group of stories involving people who were perhaps linked by that event and everyone responded to the idea - and responded musically which was brilliant. The whole thing seemed to assert itself, if you like, and we didn't have to really talk about it that much." He adds. "Plus it was a really tough time for the band with our friend passing away." The Paradise Motel's original drummer, Damien Hill, died at the end of 2008. "That helped propel us into this project I think." He adds further. "There was definitely an energy in the band that had to be harnessed, but I wouldn't really want to examine it much more closely than that." 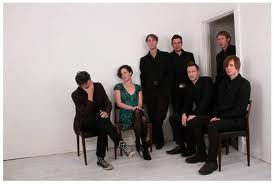 Although a new currently shelved record had been completed prior to Australian Ghost Story, Bickford explains he was moved to get a long-held interest in the story of Azaria out of his system. "I've been thinking about making a record based on this story for a very long time - Probably 12, 13 years - and the material came together I guess in a very short period because it had already been developing in the back of my mind." Charles remembers. "The event took place in 1980 and it had seared itself into my childhood memory, even though I didn't understand the subtleties of what was going on, all I knew was this terrible thing happened and everyone was talking about it."
Bickford approached his version of the events from a spectral observer's angle. There are references to recorded events, but mostly his songs etch out perspectives from those indirectly involved. "I was interested in the lives of the characters around the central event, and the paranoia Australians tended to harbour towards outsiders." The Chamberlains belonged to a relatively small religious denomination, making them in effect outsiders to the particularly singular faith most Australians of the day grew up with. "With the track Stations Of The Cross, I did touch on the religious aspect of her story - I think religion is something that can certainly feed our suspicions - but also I was interested in our childlike tendency to always be wondering what's actually lurking in the scrub, and when it does emerge will it be a little bit different from us."

The Chamberlain story is handled with great care through Bickford's words, but the album takes the listener much further than the central psychodrama. It also holds a mirror up to Australia, circa the 1980s. "I was trying to portray a nation that seemed to be buzzing, yet slumbering at the same time." He pauses for thought, "(It was) sure of itself but seemingly without a specific identity." To maintain the objectivity important to critiquing bygone events, Charles resisted engaging in too much fact finding about the case details to avoid slipping into a potential narrative. "I kept a journal over a few years and picked out just little bits of information that I thought were interesting, but the last thing I wanted to do was sit at the computer and google the facts." He adds. "I just tried to remember the event from my childhood and rely on that alone to inform the songs. I mean a lot of the record is about an imaginary life as well - like the possibilities had things turned out differently."

In some ways, it's hard to believe nobody in Australian music has attempted an album based on such a powerful story, though its artistic potential didn't escape The Paradise Motel, Charles offers. "Well it is a very attractive subject. It basically divided the whole nation, and outside of the sporting field that is a rarity in Australia." Charles explains further. "Look at Sidney Nolan's paintings of Ned Kelly and the bush rangers - they have become so iconic because, like the Chamberlain case, there's a sinister element but they're also very compelling." 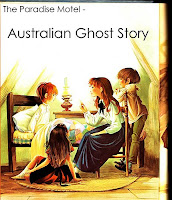 It could be argued that leading up her conviction, Lindy Chamberlain was reduced to the status of a savage animal herself. She made the mistake of not openly grieving on camera for Azaria, sparking a media obsession with emotional response as the only true indicator of guilt or innocence. Perhaps a few tears could have spared Lindy years of trauma? Charles responds. "The image of a lost child is a very strong one in any culture. Seemingly in the backs of people's minds were thoughts of 'what if it was my baby' and 'I certainly wouldn't have reacted like she did.'" He adds. "So the story has continued to remain compelling, I think, because the threat hasn't really gone away. There's always that chance another child could fall victim to one of these animals."
lEIGh5