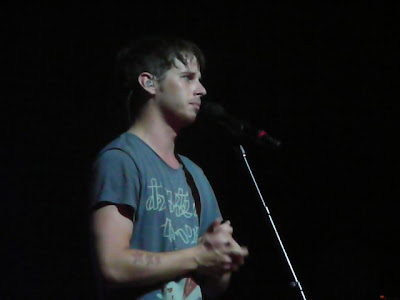 Venue: The Palace
Date: 30/01
There are way more kicks on offer at a Foster The People gig than the Pumped Up kind, the lads prove at thier Melbourne Big Day Out side-show. In concert, L.A.’s Foster The People run a tight ship, showing great care and precision in each and every song’s delivery. At this stage, their relatively short set must feel deeply familiar following an intense year of touring debut album Torches, yet there are no signs of fatigue or boredom from the guys. It’s easy to see the love for these songs in the band’s faces as much as it is in the packed Palace audience’s. For me, 2011 belonged to Foster The People. I knew looking around at my fellow punters, almost everybody there surely felt that same euphoric joy as I did on first discovering this band. Listening to Torches was a sharp reminder that something quite prominent had been missing from music in a general sense. Here was an album that by-passed any kind of current trend and instead declared a most antiquated purpose: music to bring people together. 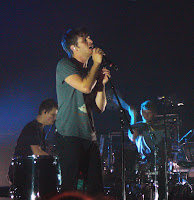 Yes, Foster The People with each sample and percussion-heavy track, serve up a big spoonful of Summer of Love - California style. The utmost contemporary, tricked out keyboard/sample pads favoured by, well almost every band and his dog, are somehow sweeter in the hands of Foster and their freelovin’ vibe. Vibe is the key word here though; peel away the layers and lyrically, very few of the bands songs would stand up to scrutiny in the Woodstock poetry tent. Houdini, being a possible exception, reminds us to ‘focus on your ability’ and break out from our ‘shackles’, and tonight as the set opener, is so mood enhancing, it may as well be sold as a prescription drug. There’s more’ happy-power’ in that one song than a Flaming Lips encore, and the metre very rarely dips below ‘stupidly happy’ from then on.

Even the bands few mid-tempo songs (Miss You, Waste) evoke enthused bouncing sing-a-longs, and its on those tracks especially the band allow themselves to really freak out and break from their recorded counterparts. Miss You descends into a wall of percussion, recalling Nine Inch Nails’ March Of The Pigs, boosted by frantic strobing as singer Mark Foster leaps from his seat at the keyboard to batter a huge tom lumped in front of drummer Mark Pontius’ kit. Throughout the whole gig, when the two Mark’s aren’t vibing of each other as duel drummers, Foster is on guitar, fret to fret with bassist Cubbie Fink or head-banging hunched over his sampler. The man doesn’t rest, switching as he does between various instrument duties, all while conducting the audience in sing-a-long. Indeed Mark Foster can add sublime showmanship to his already full bag of tricks, and frankly the determination he displays to connect with all who come to see his band shows up many a live act as detached and lazy. 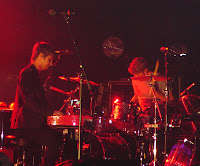 Aside from playing every track from Torches, they cover Weezer’s Say It Ain’t So; “because I taught Pumped Up Kicks to River from Weezer one night a party, and they started covering it in their shows!” Mark reveals. Naturally it sounds better than the original, thanks to the the addition of the Foster ‘stamp of fun’ but I was more than happy for them to get back to playing their own tunes. Namely, Helena Beat which concludes the main set in grandiose style and damnit all if Mark’s vocals don’t sound so much better live than on the recording. It’s an unusual singing voice he’s packing, with frequent falsetto parts, whistling and near-whispered refrains here and there, he’s nothing if not dynamic. All of these aforementioned stylings of course come together on the highly anticipated encore. 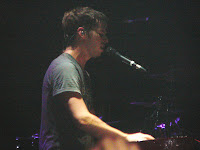 Pumped Up Kicks was the song that gave rise to what began as Mark’s bedroom muck-about project and ultimately landed him global top billing on the festival circuit. Tonight, predicting the reaction to the song, FTP tweak out a couple of extra minutes of ‘sing-it-back’ time from the heaving crowd. Shifting the song’s tempo suddenly from ‘Ministry of Sound club mix’ to ‘Linkin Park earnest head-bang’, they somehow make the whole thing work, while retaining the swagger of the original as the audience continue to shout the refrain long after Mark has stepped back from the mic to take it all in; a rare moment of stillness for the singer, who deftly steps into the front row, held aloft by countless hands where he remains grinning until the houselights switch on and his band exits the stage. He knows it’s been a good gig. He knows he gave his best and the fans were united with him in that. How thrilling it is to see a band so full of confidence in their music, and ability to perform it, yet remain totally devoid of arrogance. Simply brilliant.
lEIGh5 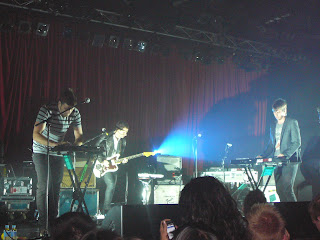 All photos by Narelle Pfitzner.

PALACE SET-LIST, 30/01/12:
Houdini
Miss You
Life On The Nickel
I Would Do Anything For You
Broken Jaw
Waste
Call It What You Want
Don't Stop (Colour On The Walls)
Say It Ain't So
Helena Beat
encore:
Ruby
Warrant
Pumped Up Kicks
Posted by lEIGh5 at 4:13 PM