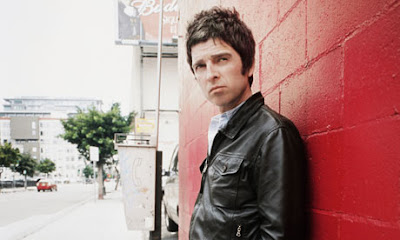 Re-emerging only last year with a new band - The High Flying Birds - and whole new set of songs, the elder of Oasis’ Gallagher brothers, Noel set himself the unenviable task of starting from scratch. Although most of the songs on the High Flying Birds’ album were written in 2008 while Noel was still in Oasis, his writing more than hinted at a severing of old ties. 2011 single, the no-hold’s barred The Death Of You And Me, heralded Noel’s new life as a solo artist, and showed a promising, more purposeful direction than most latter day Oasis. Of the new tracks, which are spread equally throughout ‘the classics’ tonight at his Melbourne Big Day Out sideshow, none can be written off as mere ‘Oasis-lite’ rehashing. Still, expectations for Noel’s solo gig were pretty moderate for me I confess.

Would the shadow of Oasis hang heavily over proceedings, as a half-full arena of disgruntled fans just mark time until Wonderwall? Well as it turns out, not even close. Gallagher is the very picture of the fabled phoenix from the ashes of his old band. Standing before us drenched in red and blue lights, age defiant was a possibly even more cocky Noel than the one who once celebrated a life of ‘cigarette’s and alcohol’. Tonight, he confidently reminds all who had forgotten how brilliant a performer he actually is, and how many bloody good songs he’s written. In place of the geezer trying to relive the glory days I half expected, was a master showman proving you can’t beat experience - fuck knows, nothing has beaten Noel Gallagher. 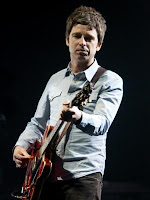 Following a standing ovation on his arrival, Gallagher kicks off with (It’s Good) To Be Free, and the choice is a master stroke. This old b-side, which has surely taken on new meaning for Gallagher in recent times, gains an immediate reaction from the packed in crowd who seem determined to match Gallagher and his band in volume. Its all the warm up he and his audience need too, as the show’s momentum and crowd response continue to elevate – especially once Gallagher wonders aloud ‘why is everyone sitting down?’ As we all gladly surrender our comfort, the band delivers a run of six tracks from High Flying Birds’ debut, each a triumph of thrilling, edge-of-your-seat rock. If High Flying Birds remind me of Oasis at all, then it’s the best elements of serendipitous sophomore (What’s The Story) Morning Glory and bust-up album, Dig Out Your Soul, which tellingly was recorded at the same time High Flying Birds was taking shape. If I Had A Gun ranks closest to ‘the Oasis sound’, offering a peak into what might have been, and also a ‘last look back’ moment before the brand new as-yet-unreleased, Freaky Teeth.

Midway through, and the electric guitar makes way for an acoustic and Noel’s band depart, leaving only him and keyboardist, Mike Rowe. Tuning up, Noel reads the crowd for a moment and gets a cheer. “Who was Saint Kilda?” He yells, while strumming something familiar. “It’s not in the Bible – I’ve checked.” Out of the laughter, a fan offers; “She was a prostitute!” Noel scoffs in return, “You’re a fucking prostitute, mate.” The laughter soon turns to cheers as Whatever (I’m Free) is suddenly upon us, along with the customary sing-a-long. The already up mood inside the Palais plateaus and Noel draws the moment out with a stunning, stripped back rendition of Supersonic - Oasis’s debut single which although has been ‘re-imagined’ still holds its power as one of the most fun songs Gallagher ever wrote. 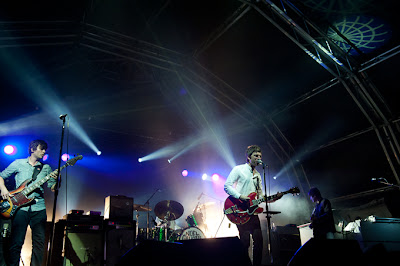 We then welcome the rest of the band back on stage for the 'most fun' song High Flying Birds have in their cannon – (I Wanna Live In A Dream In My) Record Machine. Noel’s all about momentum tonight, he’s brought his audience up and is determined to keep us there. The second set seems to fly by, as each carefully chosen song forms a kind of ‘greatest hits’ package. New gems such as Soldier Boys and Jesus Freaks meld into unsung classics, Half A World Away and Talk Tonight. The many ex-pat Brits in the audience, hoarse from belting out the words along with Noel, near topple over each other in a bid to shower praise on the man as the triple banger encore comes around. Little By Little, The Importance of Being Idle and closer, Don’t Look Back In Anger made their homes long ago in the hearts of Brit-pop fans at closing time sing-a-longs and blurry-eyed cab rides home. Tonight, Gallagher’s fans share with their idol the fondness each and every one of them hold for these songs. Noel knows to not even bother singing on Don’t Look Back In Anger – the entire audience unite in a roof-raising effort all their own – and Gallagher’s uncharacteristic grin speaks volumes in its own right, as he enjoys a momentous end to a show by one of the classiest come-back's in recent times. Nice one, 'our kid'. 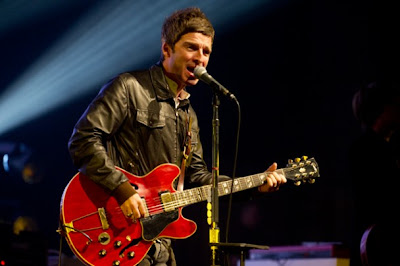 THE PALAIS SET-LIST, 31/01/2012
(It's Good) To Be Free
Mucky Fingers
Everybody's On The Run
Dream On
If I Had A Gun
The Good Rebel
The Death Of You And Me
Freaky Teeth
Whatever (I'm Free)
Supersonic
(I Wanna Live In A Dream In My) Record Machine
What A Life!
Talk Tonight
Soldier Boys and Jesus Freaks
Broken Arrow
Half The World Away
The Wrong Beach
encore:
Little By Little
The Importance of Being Idle
Don't Look Back In Anger
Posted by lEIGh5 at 2:33 AM