Rufus Wainwright: Out Of The Game (review) 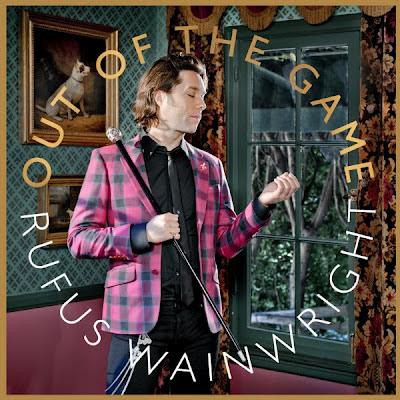 Rufus Wainwright
Out Of The Game
(Decca)

Reviewing the new Mark Ronson-produced Wainwright album, I was deeply concerned that I would be faced with a “Mark Ronson featuring Rufus Wainwright” situation. Not that this decade’s hottest producer is all that bad – his work with the Business Intl was killer – but Rufus’s major talent is in dramatic subtlety, while Ronson usually chucks a load of horns and synths on everything, resulting in a more bombastic product. With that in mind, Out Of The Game was touted as a “return to pop” ahead of release. However Wainwright’s last “pop” album, 2007’s Release The Stars, explored some of the most un-pop themes you could get, so it’s with some hesitation (and excitement) that I invest in what Wainwright is calling pop these days.

Although Rufus is 38 years of age, he has made a much older man’s album this time around. There are no handsome princes on the horizon coming to sweep him away, or nights spent trawling New York’s dive bars with his phone on vibrate. Instead, the now married singer is on the other side of the picket fence, baby in arms, and his “game” is essentially over. On the title track, his older, wiser self berates his younger self for being so tacky and shameless; “Look at you, sucker/Does your mama know what you’re doing?” Wainwright grew up very fast, and it seems in hindsight he is lamenting the early loss of his own innocence.

From reflecting on his youth, Rufus’s focus goes to the very distant future on Montauk. The track is an open letter to Viva, the child he fathered with Lorca Cohen (Leonard’s daughter), where he hints at a fear of future rejection by her for being raised in an ‘alternative family’, however, it could just as easily reflect the thoughts of anybody on the verge of first-time parenthood. Becoming a father means the game isn’t so much over for Rufus – it has simply become a different game and he is scared that he won’t be able to play it. The singer worries that he has little useful advice to offer in terms of how to get by shy of ‘it’s better to have laid in the gutter than lived in fear of life.' Autobiographical Rufus is always charming, but it’s his political stuff that’s often the strongest in terms of expression.

Jericho - a kind of sequel to 2007’s Going to a Town – makes a soft attack on religious oppression in the Middle East. Whereas Going to a Town saw Wainwright openly washing his hands of America, on Jericho he evokes a broken relationship cliché to make his point; “I keep thinking you’re gonna change/I keep thinking you’re gonna rise…” . Best of all, however, is Candles, with its most trademarked of Rufus-isms; highlighting those insignificant details in a remarkable situation which we rarely voice, but that seem to stick in mind somehow. Also Candles boasts a full Wainwright family sing-a-long, including sister Martha and their estranged father, Loudon, and is quite clearly a tribute to the late Kate McGarrigle - complete with a bagpipe solo, choir and absolutely no Mark Ronson-ey horns farting all over the place - as is the case on Rashida and Welcome To The Ball.

Although Ronson does manage to squeeze in some of his own trademarks here and there, Out Of The Game is actually quite musically restrained for both producer and artist. What made Release The Stars for example such an outstanding album was the level of risk Wainwright took, and although Out Of The Game has many glorious moments, it is in fact the pop album it was proposed to be. In other words, musically quite safe, and even a little dull in parts which is a side to Rufus we’ve seldom seen before. Further more, he doesn’t challenge himself vocally as much as on 2010’s Songs For Lulu, but then fans will love the familiarity of songs like Respectable Dive and Perfect Man, either of which would have sounded quite at home on Want One or Want Two. Whatever shortcomings there may be here though, a pop album by Rufus Wainwright is still a shed load better than a so-called epic masterpiece by many other contemporary singer/songwriters who’d struggle to grasp the idea of the game, let alone know how far they are in or out of it.