The Stone Roses: live in Melbourne, 2013 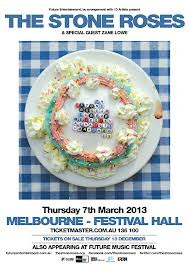 
For their sideshow in the 'Manchester of Australia' – as Mani once lovingly dubbed Melbourne - Stone Roses demonstrated that when they're good, they are very fucking good indeed. It's widely known that the lads have a patchy past in terms of pulling off great live shows, but that along with their music in general seems to be a thing of the past. It isn't terribly surprising that there is no new music from the band tonight, but at one stage during his almost flawless performance, Ian Brown hints at a future for the Stone Roses beyond the current reunion gigs.

Re-emerging in late 2011 to tour was a great move considering how closely guarded a secret it was that the band were even on speaking terms again, but Ian mentioning possible new songs without presenting any comes off as a bit of a bluff. Not that anybody could complain about the almost 20 year-old setlist which ignores most of The Second Coming in favour of that album. As debuts go, The Stone Roses simply could not be beaten. Not even by The Stones Roses themselves in fact. What is interesting though is how each song from the album performed is so very different to anything that did not make the cut. Early singles like Sally Cinnamon and several of the b-side tracks performed are all distinct in that they don't quite have the same magic as the material off the album. Of course there is one colossal exception to this rule. Nobody here at Festy tonight could argue that Fools Gold – a song they initially threw away as a freakin' b-side – was not the absolute highlight. 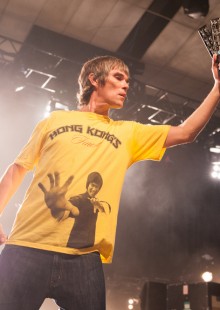 Fools Gold the song is of course great and was the band's most successful track, but live in concert, it is a whole other level of genius. It begins with Reni teasing us with a few pitchy cymbal smacks while Mani plucks out a slightly menacing, fat bass line which he maintains for the entire 13 minutes. Then, when John Squire begins the hook that kicked off Madchester and the whole rave-rock shebang, the crowd completely lose it. Why this song works so well live is because of the  combo of Mani and Reni as a rhythm section, but there's also much to love about Squire's unpredictable guitar playing and the soft echo of Brown's voice, surfacing occasionally in the mix. It's a cliché, but this really was Stone Roses at their most untouchable. So they serve up their 'it's funk Jim, but not as we know it' monster half way though the set tonight, leaving many here wondering just what they must be planning for an encore. But then, the answer could be found all along written on the back of The Stone Roses album sleeve.

Opening the show with I Wanna Be Adored – just as the debut album began – sets up a kind of 'running order' formula they only occasionally divert from. Ten Storey Love Song from The Second Coming is the first real shift, and while it isn't a bad tune, it's no Love Spreads. The strongest cut from the 'difficult second album' heralds one hell of a hit-fest. She Bangs The Drums – a song that too often fails in a live setting, emerges as one of the strongest tonight as it leaps out at us with every gun blazing and is rewarded with the biggest sing-a-long moment. This Is The One stands out as the  'one that really should have been a hit', and Brown is completely loving the all arms raised crowd response. It should be noted that a lot goes on around Ian during the gig and he makes for fascinating viewing. The expression 'calm like a bomb' comes to mind as he does his famous monkey shuffle dance, elbows stuck out horizontally as he bobs his head and glares out into the crowd. One moment he is almost whispering a trance-like mantra, the next he's inaudibly blasting a sound tech or hurling a full rubbish bin off stage at a security bloke for getting too physical with one of the fans.

Meanwhile, Mani – usually the mouthy one – remains the very picture of blissed out concentration, while Squire refuses to even look up from his shoes. Drummer Reni on the other hand is starring in his own movie up there behind his kit, which is adorned in 'Roses-esque lemon slices. It's quite telling how the band members' each seem so lost in their own worlds during the show. Their tense interpersonal relations have surely healed over time, but perhaps not entirely. There is a definite sense of 'we're back together because of the music', which they show absolute solidarity in. 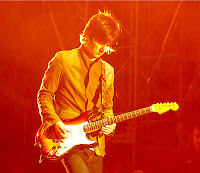 Tonight, it was a very different Stone Roses to the band who were booed off stage at Reading in 1996 and quickly dissolved in a whimper. The reunion shows have clearly been a chance for the Roses to not only bury a few hatchets but also to change the history book entry on a band that seemed so vital before success ultimately dug them an early grave. But here at one of the most unlikely reunion concerts ever, Stone Roses conclude their set with a song almost perfectly designed for such an occasion - I Am the Resurrection. It is a triumph and it, along with nearly every song that preceded it, proves that they had never really lost 'it'. There is no encore as the work had all been done by the finish of Resurrection. Instead they close the show with group hug, a bow and a shower of praise for all who'd stuck by them. For us fans it's been a long and unlikely wait for tonight, but nobody who turned up to Festy Hall could claim it wasn't all worth it. 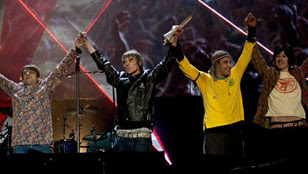