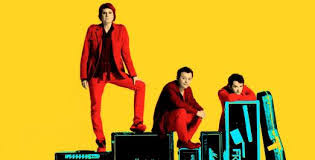 The Manic Street Preachers have evolved beautifully over the years into a band comfortable with what they are. The early cockiness, the time of uncertainty and the wilderness years are all behind them and despite having no new material to promote or even having been on tour at all, they display a refreshing, well-earned confidence tonight at Festival Hall. Having refined their strengths and shed a few old ghosts, they stand today as the very picture of ‘triumph against the odds’. The current set list alone represents a ‘chop off the slack’ approach to fulfilling what they themselves see as a ‘dream Manics set’, and while there will always be a few who go away disappointed, for the vast majority who attended tonight’s gig, it was pure heaven.

The fact that the band are here at all is a pleasant surprise to their multitude of devotees, making this one-off show all the more delicious. A tie-in with the British and Irish Lions rugby match in Australia was the given reason for a fly-in fly-out visit, while back home in Cardiff, the band were up to now putting the final touches on the follow up to 2010’s Postcards From A Young Man. The buzz about new music from the band has yet to really take hold, so focus tonight is on a no bullshit straight-up greatest hits package, with a few surprises thrown in for good measure.

The biggest surprise however is not band-related so much, as their audience tonight. Whereas the Manics dial has most often been tuned somewhere between glittery glamour and muscular rock n’ roll, tonight the switch has been given a hefty shove towards the latter. The Manics found their inner brute in an effort perhaps to appeal more readily to the present boof-head contingent. This is after all a show designed to bring together the many rugby loving ex-pats in Melbourne as well as appease the already converted. But then it’s just like the Manics to pull a mob of beer-soaked lads and wags only to lead them in a cheery sing-a-long about tackling an anxiety disorder (Send Away The Tigers) or the evils of consumerism (Motorcycle Emptiness). 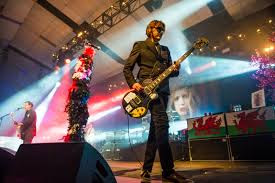 It may all have been a little ironic, but not in such a way as to spoil the glory of their performance. James Dean Bradfield – looking fiercely fit – commanded our attention in that remarkable voice of his, and remained the undisputed ringleader throughout. His spirits are notably up as he jokes and banters with the crowd and his band-mates, loving every minute of the gig and perhaps riding high on the knowledge that there’s no nerve-rattling 50-date tour penned in this time round. Nicky Wire, always the elegant, if not mouthy one, is however short on words and even shorter on his usual drag tonight. That is to say, we didn’t get a much anticipated sighting of those marvelous legs dangling down from beneath a netball skirt or some such, and had to make do with a mere sparkly unicorn decal on each cheek as compensation. Despite such setbacks, he still has the power to get a large number of fans swooning, and remains one rock’s most beautiful creatures.

In light of the band’s more recent overseas shows to promote their singles collection National Treasures, there is a somewhat retro feel about the song selection. There are a number of fans here who weren't born when Generation Terrorists came out, but it is the early tracks (You Love Us, Motown Junk) that get the biggest response. A now long tradition in Manics gigs is the acoustic interlude where James belts out The Everlasting - with full-crowd backing – only tonight we get the added bonus of some classic Bacharach in the form of Can’t Take My Eyes Off You. The surprise cover delights us all and sets up nicely a grand finale in the form of Little Baby Nothing – which featured a rather goofy looking Jamie Roberts of the British Lions as surprise guest on acoustic guitar – Tsunami, Motown Junk and If You Tolerate This bring the set to a blinding close. But as tradition dictates, there’s no encore despite James’ teasing us with the possibility.

The show was a full body saturation of the Manics power as a live band and even a somewhat sad reminder of how many genius songs they have in their canon which have been largely overlooked. For the devoted here though it was just not enough. The knowledge that it may be several years before they come back hangs heavy at the conclusion. Talking to fans outside the venue in the cold night air, there is a mix of elation and gloom. This was after all only the bands third visit to Australia in their 26 year career. Love for the Manics is so strong among those who invest in their songs and it’s the kind of devotion many bands could dream of. The reason being, they are a band you can care about and they mean something to people which – like their peerless stage presence witnessed tonight at Festival Hall – is something worth celebrating. 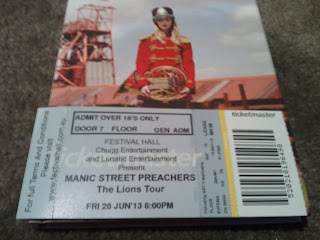