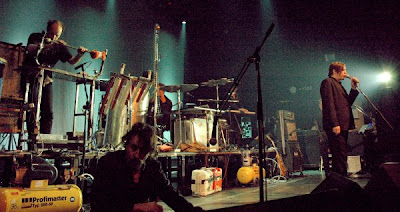 The excitement of what to expect from one of the world’s most unusual and  notoriously ‘challenging’ bands begins as soon as I enter the Palace and  catch sight of the darkened stage. One almost expects to see emergency relief workers attempting to deal with a recent ceiling collapse that occurred as some band had been setting up their gear. The sight of a few recognisable instruments jutting out among PVC tubing and compromised steel wreckage creates a sinister image. Although it’s just another gig for Einsturzende Neubauten, it is  essentially anybody’s guess what terrifying racket the monstrosities before us will create once the Berlin band begin to hit, throw, rattle and blow into them. 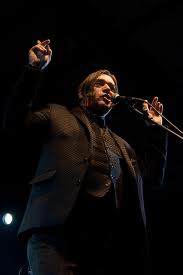 For long-time followers of Neubauten, many things have changed considerably over the course of their 33-year career, and yet a few have not. A wrecked shopping cart, masses of wire coils and front-man Blixa Bargeld’s banshee-like scream equal familiarity, but whereas Bargeld once held court in leather bondage gear and a haircut that looked as though he had been attacked by a stylist with cerebral palsy, he now more closely resembles a pre-Jenny Craig campaign Barry Humphries in all his dandy-ish finery. Gone also is the guitar he once brutally assaulted - and occasionally played as a member of the Bad Seeds - and the earth shattering electric-hammer. All this means very little however to what is a thrilling career retrospective which never feels lacking despite the aborted, more cacophonous instrumentation.

Song wise, the band choose a lesser-played set for Melbourne - Blixa’s second home for many years. Although we miss out on gems like Halber Mensch and The Garden there is still plenty to get roused over. Headcleaner goes where a lot of Neubauten songs only hint at and for that reason it stands as their true monster-piece. Played in three parts - two brutal, one mellow - it’s a relentless insanity-inducing brain hammering, that teases us with short bursts of calm only to come round again for another pummeling. Die Interimsliebenden ebs towards ‘one you can almost dance to’ but instead evokes some more suitable head-banging from the packed crowd. Armenia is played to demonstrate Bargeld’s signature horror-screech to it’s fullest, and allow custom-made instrumentalist Andrew Chudy to show off an impressive range of percussive flostum, including a bucket of metal scrap which he showers onto an amplified plate near stage front. It’s during Chudy’s carefree hurling of dangerous objects that the venue security become visibly alarmed and brace for possible intervention. 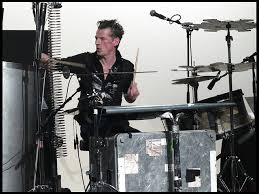 For Bargeld however, the tense moments are not during the crashing of metal on metal or glass on metal but rather when one note is played off key in the sombre Sabrina, completely throwing the singer into a very visual tantrum. It’s a very telling moment on how much Bargeld requires total perfection from his band when he berates keyboardist Ash Wednesday and insists they begin the song again from the top. The apparently short temper and commanding presence of Bargeld make him a fascinating subject to fix eyes on throughout the melee that is happening on stage. The lack of guitar means that he is free to mess around with various objects throughout the show and as such add libs with a loud-hailer, a drill with a vinyl record attached to the bit and various voice-enhancing gizmos. Though if there’s another, equally bright star on stage, it has to be drummer Rudolf Moser. His kit is the perfect enviable big boy’s toy. Much bigger than probably required and composed of chunky wire coils, steel cylinders and saw blades - it ranks as the coolest thing ever seen at a concert. Ever.

It’s impossible to end this review without mentioning the biggest and best non-drum kit related part to Neubauten’s show; the catharsis of sheer non-conventional expression through screams and grinding machines clashing with sounds so intimate, they are little more than a whisper in your ear, or - as is the case of Silence Is Sexy - a drag on an amplified cigarette. 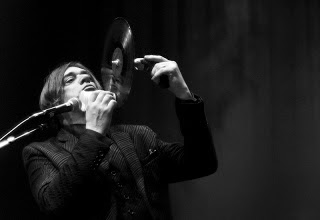