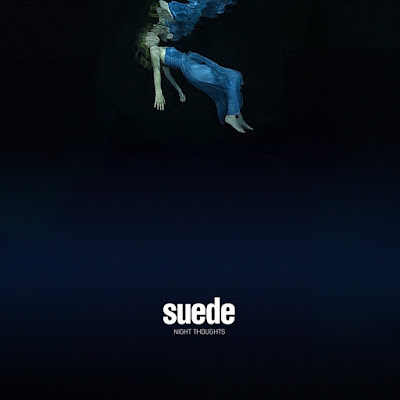 Time was NME journalists and the like would devote entire columns to the latest Suede single, marveling all the way and proclaiming them to be the saviours of Brit-pop. Every morsel the band threw to the public was, for a time, a gold nugget rolled in glitter. The established old guard, including Brett Anderson’s musical “parents” Bryan Ferry and David Bowie, couldn’t get arrested when Suede dropped their debut album in 1993. It was a lot of pressure for a young band, and they ultimately those gold nuggets began to take on a decidedly brown hue by the decade’s end. After a stately return in 2013 with Bloodsports, which went a long way to recapturing their glory, teasers for the release of Night Thoughts were peppered with references to early Suede touchstones. Particularly, singer/songwriter Anderson’s fixation with the nightmare of domesticity and Kate Bush’s album Hounds Of Love. Sure enough, the influence of both can be found here.

Take side two of Bush’s album, dubbed The Ninth Wave; a concept piece about the last thoughts of a drowning witch and compare Anderson’s blueprint for the new album; thoughts of a metaphorically drowning man who has found himself in domestic hell. To round out the concept, Suede even commissioned a feature film based on the album. Yet after Bush and later, Fever Ray masterfully addressed similar concepts I was a tad sceptical approaching Night Thoughts. The album opens with When You Are Young, which unsettles immediately. Icy, descending strings coupled with children’s shrill voices buried low in the mix give way to Brett’s typically dramatic, foreboding vocal. No Tomorrow manages to raise a daft lyric-inspired smile, despite being about Valium abuse. It’s also a good, loose rock number vaguely reminiscent of old-skool Suede hit, Trash. Back also is the slow-burning epic Suede on Pale Snow, which hits its mark without falling over the top. Tightrope alternately sees Brett straining his voice, which highlights a flaw in the song’s ill-advised attempt to be powerful. His falsetto rears up with better results on Learning to Be, while first single, Like Kids verges on irritating. Pared down, Night Thoughts could have really been epic, rather than a little overwrought, which has always been a fine line for Suede. The cinematic concept and lyrical theme are impressive in parts, but as a whole, the idea feels stretched making it anti-climactic. Giving the masculine perspective on domestic inertia and paranoia is an original move, but unfortunately so is hearing them burdened by normality.