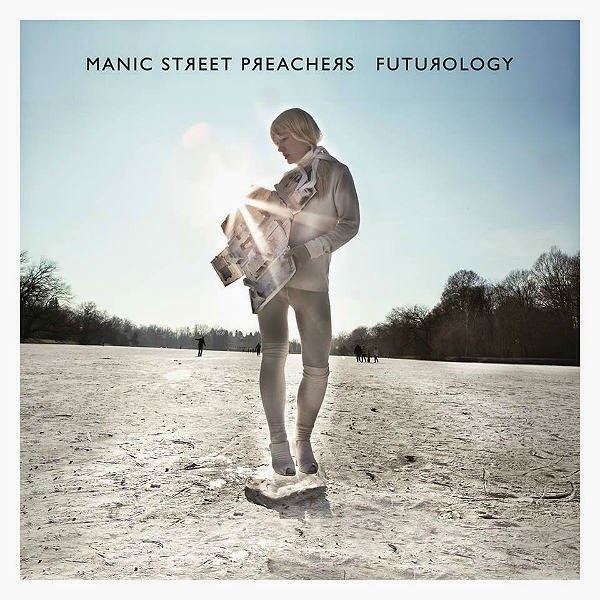 The build up for the release of Futurology began almost a year ago in the wake of the Manics 11th album, Rewind The Film. What was promised was a heavier ‘yang’ to Rewind’s acoustic ‘ying’ - Nice analogy, and hardly a first in music, but ‘yang’ comes nowhere near cutting it when describing Futurology’s monstrous, Germanic stomp over Rewind’s slow amble through Wales’ recent history. Recorded at Berlin’s world renowned Hansa studios, the second part of a proposed trilogy takes its cue from post-new wave industrial music, David Bowie’s Low and good old German precision. Pre-release, the fan-teasing announcements came thick and fast ensuring anticipation levels never dipped. A return to rock, a variety of guest vocalists, and the knock-out punch that Alex Silva would return on production duties had fans salivating. After all it was Silva who assisted in bringing The Holy Bible to life – long considered to be the Manics’ true masterpiece. While that album was a sprawling bombsite of nervous energy and the darkest of thoughts, Futurology is the post-devastation re-build - and if any band knows the meaning of ‘rebuilding’ it’s the Manics.

But all anyone really needs to know in order to enjoy their current work is that contradictions abound and listeners are challenged to make their own minds up as to why. Futurology is defined as the study of patterns in society with a view to predicting a probable outcome. It is argued that this is a futile act, and that hindsight is the only true teacher. This pseudo-science is a hint as to where the Manics are coming from. The importance of ‘learning from the past’ is a mantra most history buffs are quite happy to chant, but on Futurology the Manics present a more realistic – opposite is reality – theory. The title track sets up the album’s manifesto with muddled tenses, “we’ll come back one day/we never really went away”. Musically, the past is carefully mined to include sounds associated with a time when Kraftwerk and The Human League were THE sound of the future. Rest assured though, this is no puffed up ‘ironic ‘80s’ album from a bunch of aging socialist rockers. First single Europa Geht Durch Mich’s delivery is icy and direct, aided masterfully by German film star Nina Hoss who swaps choruses and verses with JD Bradfield. The result is an urgent, militant bilingual exchange over a relentless marching beat that makes Rammstein sound whimsical by comparison. Europa is complemented and perhaps even outshone by the fearsome Let’s Go To War. The darkness of The Holy Bible returns on this rally cry, which conjures up images of goose-stepping Nazis, while clearly is a reaction to the bands’ own occasional dithering deviations. It’s an odd blend of Eno-esque cavernous/claustrophobic synths and multi-tracked vocals – surely a signature of Hansa studio itself. Most importantly though, because it’s a Manics album, these tracks - along with Sex Power and Money and Walk Me To The Bridge - are dressed up as certified stadium rock anthems. The latter of which is pomp at its best. Imagine Livin’ On A Prayer shagging She Sells Sanctuary – only much better.

At its core, Futurology is a complete overhaul by a band approaching middle-age and who are still hungry but keen to put a few past mistakes to bed. Wire’s biting but self-effacing lyrics on The Next Jet To Leave Moscow are a genuine nod to errors of judgement, such as the much maligned concert for Castro; “So you played in Cuba, did you like it brother?/I bet you felt proud you silly little fucker”. Departure is a recurring theme but predominantly the songs are underpinned by a youthful, idealistic future full of possibilities versus the lamentable reality. The View From Stow Hill as a case in point is the tale of two desecrated cities – Newport and Berlin – both of which quickly became gentrified after years of neglect and political mismanagement. Wire’s bitter-sweet observations are carried on through the sublime working class ballad, Between The Clock and The Bed – a perfectly matched duet between Bradfield and Scritti Politti’s Green Gartside. Misguided Missile is the nihilist from Faster all grown up, “I am the strum and drang/I am the Schadenfreude/I can still fill your void.” But it’s the longing Divine Youth that is the real heart of Futurology. This paean to physical change - the truly unavoidable indicator of passing time – humanises this often brutalist work. Only time will tell if Futurology will enjoy the level of plaudits often heaped on past glories like The Holy Bible or Everything Must Go, but the Manics know too well recognition for their victories has long been hard-won. If anything it’s this fact which has ensured they continue to work harder and are quite likely to yet produce their finest album. In the meantime, Futurology will do nicely as wearer of that particular crown.