FUNKEE BY NATURE
At hip-hop’s high end, there’s a lot of cringe-worthy behaviour that apparently serves as an enviable lifestyle. While these, often overnight, star’s pavement to penthouse stories continue to impress bogans everywhere, it’s comforting to know that for every overblown clown in a white suit with more jewellery than Kleins’ factory warehouse, there are fringe artists like Del Tha Funkee Homosapien, sharing more in common with the bohemians than the Fresh Prince of Bel Air. This Oakland, California native shunned the potential of an ‘easy street ride’ after cutting ties with his well established cousin Ice Cube, who helped launch the then 18-year old’s rap career. Del’s 1991 debut, I Wish My Brother George Was Here – a reference to his idol, Parliament’s George Clinton – showcased a decidedly less popular hip-hop/funk style, more in tune with Brooklyn based acts like 3rd Bass, than Cube’s/NWA’s West Coast gangsta rap, which was peaking at the time. His break-through single in the same year, Mistadobalina, openly stung the corporate hand which was already starting to dig deep into the hip-hop scene to check for potential cash-in-ability. But while it’s a credible thing to be seen as shunning The Man in hip-hop, Del – one time seen as ‘rap’s court jester’ – it turned out, was a little more serious than many of his contemporaries, and hence is still around to claim a sizeable share of respect, without so much as a hint of white suit-ery. 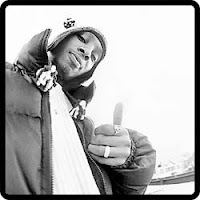 To celebrate his new album, The Golden Era, and 20 years of solid work, Del is making his first Australian visit since 1992. “I haven’t been out there since back in the 'Dobalina days, man but I got a lot more stuff behind me now.” Anyone who’s followed Del’s progress since would concur, the man is tireless. Nine solo albums, collaborations with Handsome Boy Modelling School, Deltron 3030, Gorillaz, Souls Of Mischief and even Dinosaur Jr, amounts to shit-loads to choose from for his live show. “I’m bringing everything I’ve done in one neat package for you all.” He teases. As for the hotly anticipated new Deltron 3030 album - his on/off group with cohorts Dan The Automator and Kid Koala, who slaughtered the competition in 2000 with their self-titled debut – Del urges ‘it’s coming’. “It’s still under wraps, you know, it’s not performance ready yet, so I won’t be doing any of that on this tour. It’s half-written though, so we’re hoping to get that out this year some time.” It’s often overlooked, but Deltron 3030’s debut was way ahead of its time in terms of where hip-hop was heading. While Kanye’s enjoying his view from the top, he should probably raise a little toast to Deltron – the first futurist hip-hop act on the block.
“It’s weird because that first record was pretty huge, you know, but we don’t know what we’re gonna do with this next one because the industry’s kinda fucked up now. We don’t know how we’re gonna release it yet, but that’s cool.” He adds, “I like change, you gotta move with the times and find new ways to get your stuff out there.” Del’s a stronger, wiser man these days since deciding to take the fate of his career into his own hands. Starting the Hieroglyphics label in the early ‘90s, Del was able to sustain his and several fellow underground rap acts releases when the major’s all backed out. But wiser still, it proved, Del began teaching himself music theory, and was soon digesting the lesson’s final examination text; How To Write A Hit Song. “For me it seemed natural to learn all I could about music, being a song writer.” He confirms, “If I was a visual artist, I would have my crayons, my oils, my easel and I’d learn about shading and all that; I’d have all the tools. So, by learning music theory I was adding all the colours to my paint box, you know what I’m saying?” He laughs, “But I make music for a living so I knew instinctively from that and from listening to it for so many years the how-to, but music theory taught me all the names for the parts in composition. I got tired of kinda winging it, you know, it was time for me to get professional.” Del’s tidy link between music and visual arts went beyond theorising, when in 2001, he became immortalised as Del Tha Ghost Rapper in Gorillaz, complete with his own animated on-screen character; a genuine dream-come-true situation, he claims.


“When I saw the artwork for Gorillaz, I already knew it was Jamie Hewlett’s work, man!” Del hypes, “I used to collect the Tank Girl comics man, that shit was tight, you know what I’m saying? When Dan (The Automator – Gorillaz/Deltron producer) introduced me to the project and showed me all the artwork, I was into it before I had heard any music just because Jamie was involved. He’s the reason I said yes.” In its infancy, Del was the first artist on Gorillaz, now overflowing, guest list. However, the previous year, he worked with Damon Albarn on a track for Deltron 3030, perhaps even informing Gorillaz ‘futuristic’ musical direction. “I dunno man, Damon already had platinum hits in Blur, right, so he wasn’t trying to recreate that, he was trying to make this cult thing - which was only gonna be online at first - so I think he just wanted it to be as far from what he had done before as he could get.” As Tha Ghost Rapper, Del performs elaborate rhymes - which he claims he wrote in under half-an-hour - on the Gorillaz tracks, Clint Eastwood and Rock The House. He explains. “Me and Dan were just finishing up in the studio on some Deltron stuff, and he was gonna take me home, and then at the last minute he says, ‘oh, do you think you can put some lyrics to this song Clint Eastwood’, and I’m just wantin’ to get home, you know, so I did my thing real quick so I could leave.” He laughs, “They already had a rap on that song, but the lyric wasn’t great you know. Anyway its Dan I gotta thank coz now I got a platinum disc on my wall, it (Gorillaz) paid for my house, and I got my own character by Jamie “Tank Girl” Hewlett. That shit turned out good for me!” Saying ‘yes’ to Gorillaz, learning his trade, starting Hieroglyphics and generally avoiding the rap star clichés, have all clearly helped Del survive in uncertain times. He discusses. 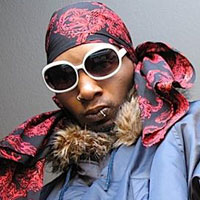 “I got a lot of guidance from Ice Cube back in the days but also, I’m a Leo man, that’s like the super-instinctual sign,” he laughs, “I’ve always just known what to do. What can I say?” In more practical terms, Del offers, “More importantly though (producers on Del’s debut album) Boogiemen and DJ Pooh taught me all about getting my tracks up to scratch.” When Del wrote his first hit in late 1991, Mistadobalina, cousin Cube was quick to bow out. Del recalls, “I remember at early shows, Cube would come on and introduce me and hype me up to the crowd you know, and it was like, well I don’t need that now.” He grins, “I think a lot of people would’ve been happy to sit up under him and get a name just for that alone, but that’s not what I’m about.” Dobalina was Del proclaiming himself rap's dissident from the very start. The music industry’s ‘compliant suits’ - as he portrayed them in this track - could have risen straight from the pages of 1984, with Del painting himself as the stories' protagonist, Winston Smith. In fact even a cursory glance at much of Del’s work, particularly Deltron 3030, smacks eerily of George Orwell’s vision of futurist, near-parallel funk-less world. He responds. “That’s the stuff I like to think about – how the world ain’t what it’s cracked up to be sometimes. It’s not just about corporations though, there’s people who’ll try and keep you down no matter what, you know. I’m from Oakland, California and there’s some serious pimpin’ going on down on every street corner; people will tell you anything just to get something out of you, and that’s what 1984 boiled down to for me. If they think they can, most people will try and keep you in line with whatever their agenda is.” 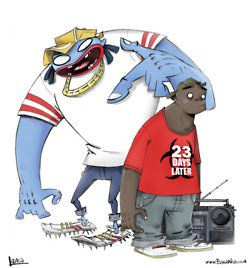