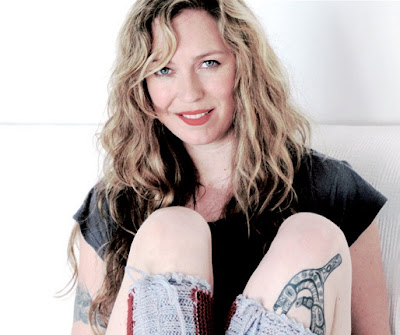 THIS BIRD HAS GROWN
Angie Hart has always submitted to growing up before our eyes. Her songs from the very start always came from sharing real experiences; such as the sweet joy of first love (Labour of Love); through I'm-alright-as-long-as-there’s-valium songs (Accidentally Kelly Street); to bitter-sweet songs of accepting human failings (Ordinary Angels). All the while her own monsters and angels remained wrapped around her feet, waiting to be revealed upon the slightest lift of her hem. Even in a time of dead inspiration, Angie breathed into life the very feeling of writer's block (Lonely), showing how close she could go to even making greatness out of nothing at all. There were always indicators of a girl who never did anything by halves. It was extreme joy, anguish, desire etc.. yet always sung in a beautiful medium falsetto. That voice acted as a reminder to its owner to be cautious of wallowing, even in some pretty dark times. Take the title of her debut solo album Grounded Bird (2007) for example. The emphasis was on defeat and restriction - a theme which carried over into the songs themselves – still the work never dipped into hopelessness.
Now after a year or so of cautious steps forward and upward, Angie is truly taking flight on Eat My Shadow. Perhaps her recent marriage - her second - along with a catalogue behind her of well shaped and somewhat disguised ‘venting’ songs has allowed Hart a more contented space to play in. An expanded team of behind-the-scenes musicians have stepped in to act as essential sounding boards for Hart to realise her bold new moves. She continues a partnership with Ben Lee (who co-wrote with Ange on Grounded Bird). Plus there are further collaborations with Mark Seymour and Shane Nicholson. It is, however, Dean Manning (Holidays on Ice) - who Angie only recently worked with on his album Pillage Before Plunder – that invokes discussion. "He's a lot more playful than I am which is really contagious for me, so I love making music with him," Angie explains, "I always leave shows after playing with Dean remembering what's fun about music and how to make it more enjoyable." The Holidays On Ice project which drew Angie and Dean together earlier this year was a welcome distraction for Hart who was working through the songs which would become Eat My Shadow. "Holidays On Ice was so different to what I was working on at the time, and that was just what I needed to stop myself taking things too seriously, which I tend to do at times when I write."

Angie's main writing partnership on Eat My Shadow was Silver Ray guitarist Cam Butler. "There are a lot of guests on the album, but Cam arranged the strings for me and he and I did a lot of the writing together too." On the outstanding Little Bridges, Angie roped in Bonnie Prince Billy for a duet, a dream collaboration come true, she reveals. "That was one of those magic things where I just sent off a letter and hoped for the best and he replied straight away." That song had always been planned as a duet; it was only a matter of finding a voice that fitted. Hart beams; "Billy is my most admired singer and so he was always on the very top of my wish list. It goes to show it really does never hurt to ask."

The new album begins with a couple of affirmation songs - There's Nothing Wrong With You and I'm Afraid Of Fridays - leading me to wonder if Angie had been killing some old demons; "I love the affirmation songs at the moment." She states joyfully, "Fridays was a song for me, and There's Nothing Wrong With You was written for a friend, but every time I sing it, it seems to always come back to me. It's that old story of whatever annoys you about someone else is actually the thing that you most hate about yourself." The track comes across like a letter from the heart, asking the recipient to confront their dark side, go to battle with it and basically toughen up or be forever defeated. This song leads the charge that is Eat My Shadow away from Angie's own low points in life. A time filled with many such low and high points were the six years spent in Los Angeles with now ex-husband and collaborator Jesse Tobias. The two formed the band Splendid, which existed during the six years they were married and produced two albums. The ensuing separation helped inform the songs that became Grounded Bird. A possible further indication of a problem pairing came in the form of Angie's a touch-too-personal cover of Pet Shop Boys' You Only Tell Me You Love Me When You're Drunk released in 2004.
Also while living in Los Angeles with Jesse, Angie became friends with the Firefly and Buffy The Vampire Slayer series' creator Joss Whedon. Their fast friendship would prove to expand Angie's international profile dramatically, and allow her an exotic new way of working; "Joss and I had a very shy working relationship." Angie begins, "I remember we would just write things down on bits of paper and slide them back and forth across the table to each other. We wouldn't really talk in those sessions either, so it was a whole new way of writing for me." One of the resulting songs from their paper swapping, Blue ended up in an episode of Firefly not long before the singer herself made a cameo in the series giving many in the US their first taste of Angie. "It was exciting venturing out into the world of television, you know completely outside of my line of work." Angie enthuses, "It was fun being the token Australian as well!" It was during the short lived series that she really got to feel a part of the action; "That particular episode I was in was really exciting because I worked around staged explosions and fake gun fights, so I got to do a bit of stunt work there." There were stand-ins of course, Angie for the dangerous scenes, yes? "Well that's the thing when you're an extra like I was; you don't get a stunt guy." She laughs, "We all had to do our own stunts, but it wouldn't have been much fun if we hadn't. I just threw a little fake blood on my bustiea and off I went!" 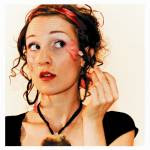 Before Frente and the glitz of LA, Angie boasts the humblest of beginnings. Growing up in Hobart until the age of ten, Hart experienced her first years of life from inside a Christian commune. The experience however never left her feeling particularly stunted as she transitioned into adulthood, and into life as a musician; "I remember it being a pretty happy environment, I think Hobart is a great place to grow up; being so close to nature and that." Moving to inner Melbourne at ten came as something of a rude shock to the young Ange. She explains; "I think I took to it more than my sister (Becky Hart) did, but it was definitely a shock to the system. I found Melbourne a little harsh compared to Hobart looking back, but I’m glad that we did move because it was a really great place to get involved in theatre and music. All the things I was interested in.” Angie’s upcoming tour will take in Hobart this year for the first time since her days with Frente in the early 90s. Her recent support slot for Johnette Napolitano’s tour saw Hart revisit a few classic Frente songs, so how does the singer feel now about the music she was writing then; “Well I think like most people our age (at the time) we took it pretty seriously.” She laughs. “We would chuck as many words into a song as we could and they of course had to mean sooo much to us.” She ads unapologetic, “I look back fondly though, I mean I can actually enjoy playing those again now because I realise I can never go back and write songs like that anymore. I just can’t, I am a different person now and I have all the intricate knowledge about making music and all the many possibilities. The Frente stuff was written by someone who was very green and didn’t know very much.”
lEIGh5


http://www.myspace.com/angiehart
Posted by lEIGh5 at 1:17 AM