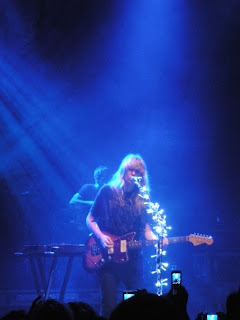 For Ladyhawke singer Pippa Brown at least, what has become the runaway success album of the last 12 months, was simply her  exercise in making songs for lovers of nostalgia. The blueprint is 80s pop-soul, but done with freakishly authentic attention to detail which easily transcended Ladyhawke’s many contemporaries who were all borrowing and bottling typical 80s-centric sounds and creating a movement in the process. Whatever it was she tapped into on her debut album, it brought with it a wave of accolades and international recognition for the shy New Zealander. Unfortunately it’s this shyness that permeates through the Ladyhawke live show, or at least the one witnessed at the Forum tonight. Pippa has clearly walked out of her bedroom - where the songs were apparently composed - and onto a stage without any sign of a transition into live performer. Brown tonight is playing a rather un-dynamic conduit of the songs which have made her a household name.
It isn’t all bad news though for us, her eager audience who have waited a considerable amount of time for this – her first major headlining Australian tour, no less than a year after the album first hit the shelves. A great deal of work has gone into the stage presentation, including a huge water colour portrait of a howling wolf by artist Sarah Larnach (who also did the My Delirium video), a first class light show, and a particularly overzealous smoke machine. The usual pre-show wait involving looking at roadies fiddling around with knobs for as long as it takes to slowly drain the bar is replaced tonight by ridiculous amounts purple lit smoke gradually engulfing the stage. I suddenly feel like I’m in Purple Rain and Prince is about to burst through the fog in his high heeled boots, and shove Let’s Go Crazy in our faces. No sooner had that thought made me forget who I was here to see, than the four silhouetted members of Ladyhawke’s band emerge from the cloud and move into position. 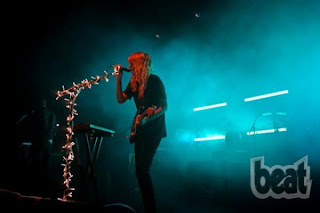 Front and center Pippa herself parks herself behind the mic stand which has been heavily decorated in glaring lights, giving the impression of a very scrawny Christmas tree. Brown is furnished with a small programmable keyboard and guitar while fleshing out the sound are her touring band on main keyboard, guitar and drums. They begin with Magic, the album’s fifth and latest single; and yet another example of why 2009 has been Ladyhawke’s year. Magic, as with many other songs tonight, floats through the Forum on a driving, instantly familiar hook. The audience erupts in approval and for a time it’s easy to forget about little things like muddy sound, poor microphone volume and Pippa’s complete lack of mobility. By the third song however, From Dusk Til Dawn, it becomes apparent that Pippa is in fact hiding behind her mic and has no intention of coming out from there. Her voice is also so low in the mix that at times she almost disappears completely in the noise, lights and smoke. It’s a shame because the set list - mostly just the album with only a couple of exceptions - is an embarrassment of goodies. The first diversion from the album, a b-side (or whatever they’re called now), Danny & Jenny very nearly steals the whole show. Here’s where the problem lies for your humble reviewer, Pippa’s performance tonight is at worst mumbled and careless, but even the songs she’s thrown away as b-sides are so damn good, a sloppy performance fails to ruin their appeal.


The problematic ‘mumbling’ mentioned before has caused a fan down the front to start shouting at Pip to ‘turn her mic up’ to which the singers responds “It doesn’t have a volume control – I can’t just turn a knob and make it louder”. I feel bad for Pip during this exchange because for the first time you can see her frustration with the obvious sound problems that have affected the show so far. It’s time to pull out the hits and calm the savages, and so is the case with Back Of The Van. How that song with it’s ‘you set me on, you set me on fire’ refrain could not have been lifted from some teen drama/comedy circa 1987, is incredible. Back Of The Van has won back a few disgruntled I’m-not-dancing-anymore-‘til-she-sings-better fans near the front, and so with the momentum up again at last, we get Crazy World, Better Than Sunday and Paris Is Burning back-to-back. During the latter song, Pip steps away from the mic for the first time tonight, giving herself room to drop in a pretty fat guitar solo and extending Paris Is Burning by a couple of minutes. 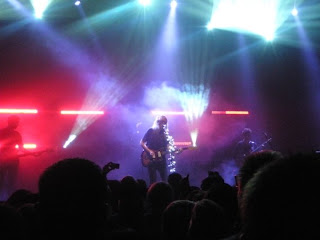 Two well chosen covers make up the encore; Split Enz’ 1984 single, Message To My Girl holds well with the Ladyhawke big chorus nostalgia ethos, but it’s Patti Smith’s Free Money that has Pippa really indulging a rock ‘n’ roll dream. As expected, the band finish with their biggest hit locally, My Delirium. Although this made for a top finale, the band still struggled against a poor sound mix right to the very end, which is perhaps what prompted them to walk hurriedly off stage, barely acknowledging the crowd as soon as My Delirium was over. Annoying, but what was really niggling at me long after the show, was did we see Ladyhawke on a bad or good night? Because whichever it was, Pippa really needs to develop herself as a performer. She’s got the songs, she’s a mad guitarist, and already has the international acclaim – so if the band could just work out their technical crap, and Pippa find her inner stage beast, they’ll be absolutely fucking deadly.
lEIGh5 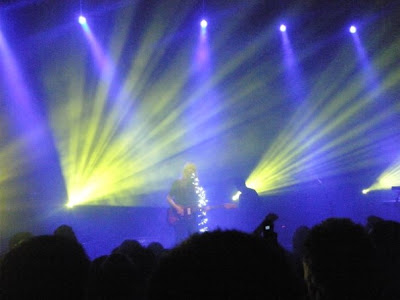